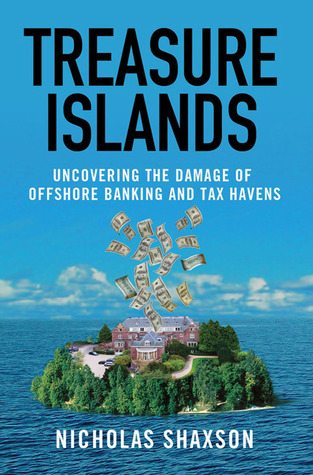 In Treasure Islands: Uncovering the Damage of Offshore Banking and Tax Havens, Nicholas Shaxson, a former Financial Times and Economist correspondent, argues that tax havens play a central role in a number of crises, including economic stagnation, countries facing bankruptcy and recession.

The book demonstrates why tax evasion is costing the US $100 billion in lost revenue each year, and there is a similar story in many other countries. A wide range of case studies, including London, Moscow and Switzerland, are used to highlight how many bankers and multinational corporations are involved in the practice and its wide reaching impact.

Shaxson uses shocking statistics to highlight his points, such as the fact that half of world trade is routed through tax havens. Treasure Islands also shows the impact tax evasion has on developing countries, which arguably needs the tax the most. For every dollar of aid sent to these countries around ten dollars leaves again through tax havens, leaving them in a far worse position.

The impacts of the practice also have a devastating effect on developed countries. Shaxson traces the recent financial crisis back to Wall Street’s offshoring practices establishing a link between tax havens causing economic crises.

Treasures Island does an incredible job at shedding light on the complexity and injustices in the global financial system in jargon free and easy to understand text. It allows the average person to understand why companies and some individuals are able to generate huge amounts of wealth and benefit from economies whilst contributing relatively little in comparison to their revenue.