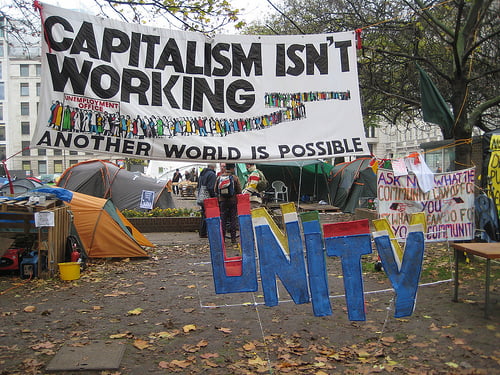 The fall of the Berlin Wall, one of the starkest symbols of Soviet oppression, heralded the end of socialism. The collapse of Lehman Brothers will probably be the herald of the end of Anglo-American capitalism. Simon Leadbetter asks, what next?

To anyone, but the most ideological and dogmatic free marketer, there is strong evidence that capitalism’s current model is broken. Some economists will say that this situation is a result of too much state intervention and regulation, rather than a systemic failing of capitalism itself. Fewer regulations and smaller governments are the answer.

Those who hold this view are very poor students of history. It doesn’t make sense to use economic theories developed before the emancipation of women, rising globalisation and the information revolution. Similarly, theories that did not have to consider environmental and resource constraints cannot provide answers to our current challenges.

We saw the depressing effects of complete free market economics in the late 18th and 19th centuries. The rise of socialism and communism, as economic theories, and the more benign Keynesianism, were a response to the catastrophic and repeated failings of free markets. Crashes and poverty were endemic in unfettered markets. The welfare state was created as a result of the failure of free markets and austerity in the ’30s and the resulting second world war.

More recently, South America has rejected the free market experiments of the IMF (International Monetary Fund), demonstrating that other economic systems can prevail – despite our best efforts to crush their economies with debt and overthrow or kill their elected leaders. Indeed, the evolution of capitalism in China, India, mainland Europe and the Nordic countries is very different to the system advocated by some economists in UK and the US.

Markets that are completely unregulated, with profit maximisation being their only responsibility, according to the disciples of Milton Friedman, tend towards plutocracy and/or monopoly, a race to the bottom in quality and standards for the majority, damage to the environment and communities, and ultimately, the failure of society and nation states. The recent history of South America, for anyone who cares to open a book about the subject, shows the most egregious failures and outcomes of IMF free market experiments.

Some of the more swivel-eyed free market disciples see the end of nation states as a good thing. For them, the relentless destruction of lives, companies, governments and even countries is the natural order of things, regardless of the human or ecological cost. Nothing must fetter the market.

The problem is that the repeated failings of a 16th century economic system, capitalism, cannot be addressed by a 19th century economic theory, socialism. Smith, Marx, Keynes, Friedman and Hayek died long before the economic renaissance of China and India and the rise of the digital era, when computing capability is limitless and resources are scarce.

It is an insult to thinking people to argue that free markets are the high watermark of human civilisation and economics. Those who argue that our economy needs to encourage a relentless Darwinian struggle for survival within society and the environment have an odd concept of what civilisation is about.

For one thing, Darwin didn’t argue that it was the fittest or even the strongest who survive, but instead, those ‘most able to adapt’. The natural end state of unregulated capitalism, that of unmeritocratic plutocracy and monopoly, holds back adaptation and stifles innovation, meaning it is those with the deepest pockets and most power, rather than the most adaptable or innovative that survive.

For those who hold religious beliefs, none of the world’s religions argue that the acquisition of things is the goal of existence, that the poor should be allowed to suffer or starve, or that the natural world degraded.

Humans have, in many areas, thrown of the shackles of being an evolutionary and environmental victim. Unlike most animals, we can now extend our lives far beyond our natural span and we shape our planet more than it shapes us. When we are masters of so many aspects of our existence, why would we aspire to encourage a predatory economic system that condemns the vast majority of the population to poverty, starvation, disease and lives that are often nasty, brutish and short? Why would we allow our economic system and the companies within make the air we breathe and the land and sea that feeds us, become toxic.

We need a 21st century economic system to solve our current woes.

We would assert that a hybrid economic system has to be the answer to economic, environmental and society issues. This common sense position is being drowned out by hyperbolic extremists on both sides, as most debates are in the internet age. Very well-funded groups, with powerful vested interests in the media and politics, on the free market side of the debate, and poorly funded, disorganised and divided groups on the interventionist side.

The state can provide certain services better than free markets – natural monopolies such as national infrastructure, health and education, for example, although some would disagree. The private sector is better at providing other services – where innovation is required. Ironically, some of the most disruptive innovations in medicine (genome project), science and technology (the internet), have all been delivered by the public sector.

If we could have a mature debate about which sector, public or private, is best positioned to provide what, rather than the current level of debate that characterises each sector as ‘all bad’, we might just have a chance of recovery and progress.

The sad reality is that our system of free-wheeling capitalism, as advocated in the UK and the US, is in terminal decline. State capitalism, as promulgated by China, is in the ascendancy, without the democratic checks and balances we have built up over the years. This will, almost certainly, be a Chinese century rather than an American one, just as the 19th century was a British one.

We can, of course, throw ourselves into an unfettered and speculative race to bottom against China, abandoning workers’ rights and environmental controls, to compete with those who have none. This will mean accepting ever growing inequality, significant civil unrest and a degraded environment as a price worth paying to simply remain competitive.  The standard of living and quality of life for the majority will decline.

Or we can say productive, competitive and regulated free markets, that enshrine social and environmental responsibility, coupled with publicly funded provision of essential services, an accountable and transparent democracy and the rule of law, are the systems we believe in and will fight for. Unless we take a lead, why would anyone else?

Cicero attributed to a Roman consul, Lucius Cassius, a simple question to ask of any act or policy, “Cui bono?” or “Who benefits?“. It finds a modern form in, “Follow the money“. The question we should constantly ask is who benefits most from maintaining the status quo, moving economic power to undemocratic China, or changing the system. Sadly, the answer is often a very small elite of wealthy and powerful people.

The solution to capitalism’s failure is not more lightly regulated capitalism, but sustainable economics that balance the needs of the planet and its people and is a successful example the world can follow.