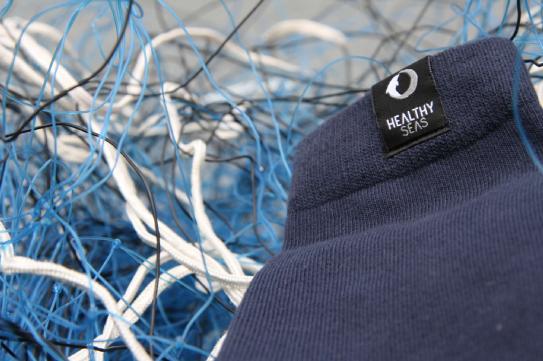 Our oceans are littered with hundreds of thousands of tonnes of discarded fishing nets, posing a major threat to sea life everywhere. In an effort to tackle this growing problem, one project in Slovenia has taken to making socks from the nets it retrieves. Nicky Stubbs recently took a trip to the country to find out more.

“There is only one ocean”, says Dr Heather Koldewey, marine biologist at the Zoological Society of London. “They may go by different names but all water bodies are connected, and that causes the problems that we face in our oceans today.”

Discarded plastic is a major challenge that our oceans are faced with. It is estimated that the US alone discards 35 billion plastic bottles every year. The majority of this waste ends up in the sea, which many creatures often mistake for food.

The problem has left some orcas off the coast of Scotland unable to reproduce. And if the plastic is being consumed by fish, then we humans are consuming the plastic.

Koldewey has been charged with the task of setting the scene in Ljubljana – the capital and largest city in Slovenia. She succeeds in depressing the journalists, fashion bloggers and textiles experts in attendance. It is difficult to see an image of one of our planet’s most beautiful and intelligent creatures – the whale – entangled in discarded fishing nets without feeling guilty that humans have contributed towards its death.

This is known as ‘ghost fishing’. With an estimated 640,000 tonnes of dumped nets on the ocean floor, it is thought that over 130,000 animals die every year because of it, from more than 250 species of sharks, whales, dolphins, turtles, fish and birds.

But luckily, a cross-consortium of NGOs and commercial businesses have got together to come up with a possible solution to these tragedies. This is how the Healthy Seas Initiative was born.

A joint venture between textile company Aquafil, NGO the ECNC Group and textile retailer Star Sock, it has already retrieved 20 tonnes of dumped nets, transforming them into an array of products, including socks, carpets, sportswear and lingerie.

Dr Irena Fonda is a Slovenian marine biologist who lives in the coastal town of Portoroz with her family, in the south-west of the country. Her father and brother, also marine biologists, help her to run a fish farm, where they rear the most expensive sea bass in the world. Keen divers, they see first-hand what is happening to marine life.

“Because we see the awful things that are happening, we want to do our bit to clear it up”, Fonda says. “Fish stocks are already in decline and ghost fishing does nothing to help this get any better.”

Passionate divers such as the Fondas volunteer to retrieve the nets from the sea bed and bring them to the surface. This is then cleaned and all the components that make up the net are separated. The polyester that is collected is then given to textile company Aquafil, which recycles the product into Econyl yarn. This then can be used to make socks (very comfortable ones at that), swimwear, carpets and sportswear.

This is a mere first step in the initative’s “journey from waste to wear”, and it still has a long way to go if it is to become a success. The prevention is certainly better than the cure, and one of the major problems that the project faces is attempting to engage the fishery industry at large.

“If we can get them to see that they’re polluting the seas, and in effect their own livelihoods, then they’ll begin to listen”, Koldewey says.

A grey whale caught in a 'ghost net'.

Talks have already begun with net manufacturers, although they are yet to come back with constructive responses. This had led some to claim that the industry should be legally held to account for the damaging effect that its actions are having on ocean creatures.

Slowly but surely, more and more marine animals are becoming endangered and often driven to the brink of extinction. The blue fin tuna alone is now worth £500,000 per fish due to its rarity. The amount of fish from that particular species caught in ghost nets every year is hindering its survival even further.

Although still in its first phase, the Healthy Seas Initiative is working to address these issues. Organisers are already in talks with clothing giants Adidas and Lotto, both of whom have said they would donate 1% of profits to the fund, but more partners are needed to participate if this is going to be a big success.

The second phase will actively seek to engage the industry to handle its nets responsibly and dispose of them efficiently, allowing for their regeneration into new products.

Finally, the initiative will seek to work with governments to set the regulatory frameworks by which it can protect our oceans and its inhabitants whilst also making a profit.

A recent report from the International Programme on the State of the Ocean (IPSO) said the health of our oceans was declining fast because of unprecedented levels of carbon dioxide, overfishing, pollution and global warming. Other studies have outlined the vast economic costs of letting marine locations degrade. Our planet is more blue than it is green, yet it is the green movement that gets the bulk of the attention.

Legendary oceanographer Sylvia Earle made a compelling argument for the protection of our magnificent oceans in a 2009 TED talk.

“I’m haunted by the thought of […] tomorrow’s child asking why we didn’t do something on our watch to save sharks and bluefin tuna and squids and coral reefs and the living ocean while there still was time”, she said.