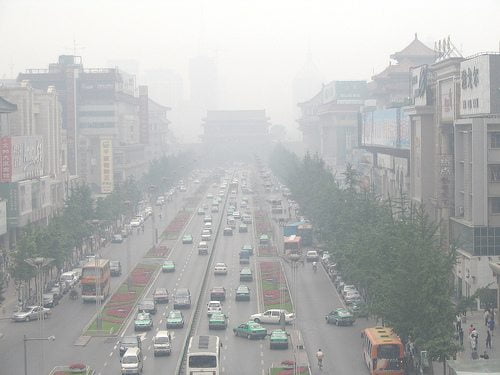 Pollution in China has reached such extreme levels that the authorities have proposed executing polluters, writes Clare Brook of WHEB Asset Management.

A recent piece of legislation which was announced on Wednesday June 19, aims to impose “harsher punishments” and tighten “lax and superficial” enforcement of the country’s environmental protection laws, the official Xinhua news agency reported (June 20 2013). “In the most serious cases the death penalty could be handed down“, it said.

Hitherto, attempts at tackling China’s pollution crisis have had little success; in particular, enforcement is a problem at the local level, where provincial authorities often rely on tax receipts from polluting industries under their jurisdiction.

But the ruling Communist party is coming under pressure from a groundswell of public opinion. In the first quarter of 2013, Beijing experienced the worst environmental data on record. Levels of dangerous particles less than 2.5 micrometres across, known as PM2.5s, were 22 times what the World Health Organization considers safe.

There was widespread public anger and protests, which led to a short-term measure of reducing road traffic, but may also be persuading the Communist party to introduce tougher legislation.

The increasingly affluent urban population is starting to object to China’s policy of ‘growth at all costs’ which has fuelled China’s economy over the last three decades, with little concern for the environment, and for those living in it. Anecdotal evidence speaks of families who are able to moving away from Beijing and Hong Kong to Europe because levels of pollution are unbearable.

Measures proposed by the state council include cutting emissions per unit of GDP in key industries by at least 30% by the end of 2017, as well as curbing the growth of high-energy-consuming industries such as cement, steel, glass and aluminium. The authorities also promised legal action against those industries that fail to upgrade pollution controls and introduce emissions standards.

In addition to curbing emissions from high-polluting industries, the Chinese government is also aiming to address the problem by reducing the proportion of coal in China’s installed power capacity, replacing it with nuclear, solar and wind power, with wind providing around 13% of the energy mix by 2020. Indeed, wind may provide as much as 200 gigawatts (GW) of power by 2020, with solar, growing faster, but from a lower installed base, providing around 50GW by 2020.

The wind sector in China has been held back in the last few years by several major issues. The first is that there hasn’t been sufficient power infrastructure in place to connect the wind power plants in the north to the transmission network. The second is that because China’s grid is designed for coal dominated power production, it is relatively inflexible. Wind producers were forced to shut down or go off grid because they produced too much energy at the wrong times. Rapid progress in the development of the grid, plus battery storage technology, means that this issue of ‘grid curtailment’ is gradually being overcome.

Finally, the Clean Development Mechanism, or CDM, which gave a slightly artificial boost to Chinese wind developers’ revenues and profits, has declined due to the collapse in the carbon price. Historically CDM income was as much as 25% of wind farm profits.  This has declined to less than 5%, so there is no longer significant risk from changes to the CDM system. These issues caused wind farm earnings to decline by more than 40% in some cases, but there is now scope for growth to recover from here.

Another piece of legislation that has been introduced, albeit one that is less draconian than proposing the death penalty for polluters, is an emissions trading scheme or carbon trading scheme. Launched on June 18, and with the first pilot in the city of Shenzhen, the scheme will extend to six other cities, including Beijing. Companies will be issued with permits, and those who pollute more than their permits allow will have to buy credits from companies that reduce emissions below government-set targets.

These targets are impressively ambitious: China as a whole has set a target of reducing its emissions intensity by 40% from 2005 levels by 2020. In Shenzhen specifically, the newly introduced carbon trading scheme covers 635 industrial companies and some public buildings that account for about 40% of the city’s carbon emissions. Here, the carbon intensity, or the amount of carbon produced per unit of gross domestic product, of these firms in 2015, will slump 32% from levels in 2010, according to the Shenzhen Carbon Exchange.

All in all, we see latest developments in Chinese legislation as both significant and encouraging for companies providing a route to a low-carbon economy.

Because of the more favourable legislative background, combined with a long period of under-performance that seems to have halted, the WHEB team recently reviewed the Chinese wind farm sector to identify our preferred investment opportunities based on growth prospects, competitive position and financial stability. The sector offers potentially high growth, but this is offset by a number of companies having poor disclosure on environmental and governance issues and over-stretched balance sheets.

The current market leader in the sector, in our view, is China Longyuan. Its portfolio is diversified geographically and it has a strong balance sheet after its share placement in 2012. We have therefore recently acquired a holding in the company for the IM WHEB Sustainability Fund. China Longyuan is less affected by grid curtailment issues than its competitors, but nonetheless we see improvements in the grid (helped by companies such as ABB, also held in the portfolio) as a key driver of the sector’s continued recovery.

Clare Brook is founding partner at WHEB Asset Management. For a fully referenced version of this article, see WHEB’s blog, where it originally appeared.