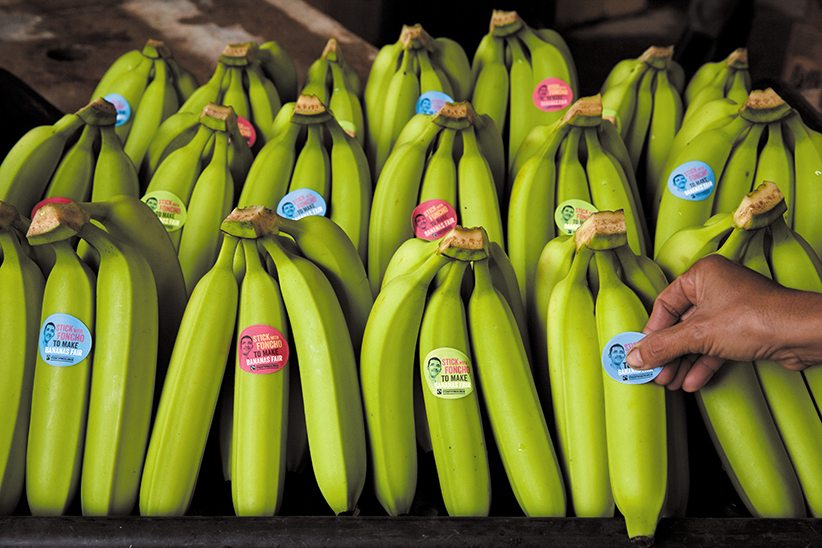 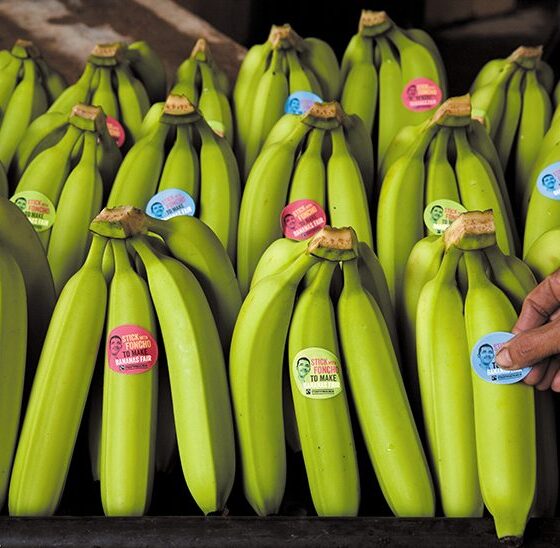 Bananas are one of the world’s favourite fruits. In the UK, we eat 100 bananas per year on average and spend hundreds of millions of pounds on them, usually buying them from supermarkets.

The average price for a loose banana today is 11p. If we think about it, it sounds rather astonishing, considering that this fruit comes from far away – usually from Colombia, Ecuador and the Dominican Republic.

It is even more amazing if you realise that we pay 20p for an apple grown in the UK. Where does that price difference lie? Unfortunately, it hits the poorest.

According to the Fairtrade Foundation, which has launched its latest campaign focusing on bananas, farmers in the developing world are stuck into a poverty cycle, because retailers in the UK are selling bananas for a too low price.

“There are structural problems in certain aspects of trade, which makes gain for farmers virtually impossible”, said the Fairtrade Foundation chief Michael Gidney.

“The problem with bananas is essentially a very, very aggressive price war. The market is so incredibly competitive with retailers chasing each other on price.”

In fact, over the past ten years, the price of bread has increased by more than 120%, while the price of sugar has doubled. In comparison, the price of bananas has decreased by 20%, despite farmers facing production cost increases of 85%. And that squeeze is heavily affecting farmers.

The aim of the campaign launched during the Fairtrade Fortnight is clear: supermarkets need to pay a fairer price for bananas that do not come from the Fairtrade circuit and therefore do not guarantee a minimum price for farmers.

This is not just because farmers are literally losing money and spending more than what they get back, without the chance to build resilient businesses, but also because the ‘price war’ that goes on within the retail sector is penalising those retailers – such as the Co-operative, Sainsbury’s and Waitrose, that have committed to sell 100% fairtrade bananas.

Barbara Crowther, director of policy and public affairs at the Fairtrade Foundation told Blue & Green Tomorrow, “A few years ago, Mark Price, managing director of Waitrose said that because they wanted to maintain their commitment to Fairtrade but they also wanted to stay competitive with retailers whose bananas were not fairtrade, they were losing hundreds of thousands of pounds a week in the price war”.

Albeiro Alfonso “Foncho” Cantillo is a banana farmer from Colombia, member of the Coobafrio Co-operative, who has travelled to the UK for Fairtrade Fortnight as an ambassador for banana farmers in developing countries. Around 60% of his bananas go into the Fairtrade circuit but the remaining share does not.

He knows for a fact the difference between farming for the fairtrade and the mainstream market, and said that the price he is paid for his non-fairtrade bananas is far too low – about $8.15 for a box against the $9 it costs to produce it.

“Farmers outside of the fairtrade system have less possibility to invest in the productivity of their farm. So on the long term, they have no possibility to offset the price pressure, unlike fairtrade farmers”, said Foncho.

“There is a structural economic problem in banana supply chain and even if farmers like Foncho are protected by the Fairtrade system, they are not protected for the conventional bananas”, said Crowther.

“We are looking for structural solutions”, she added, explaining that the aim of the campaign is to call on the government, particularly the business secretary Vince Cable, to investigate pricing and trading policies of retailers to fix this market dysfunction.

This dysfunction is not clear in the UK only, but is of a particular concern here.

“I think the UK has started to build a reputation for being quite aggressive around pricing. In France there is a law that says that you cannot systematically sell a products below the production cost”, Crowther said.

Crowther added that the negative influence of pressure of competition in the UK might spread over Europe and push retailers in other country to take on a similar price war.

Over the following two weeks, consumers should more than ever reaffirm their preference for fairtrade bananas, to send a strong signal to retailers. They can also participate to the Fortnight’s events and sign a petition demanding government action.