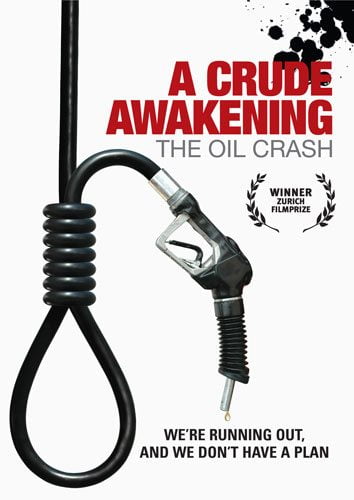 A Crude Awakening sets out predictions for an oil crash and the implications it would have, as well as looking at what alternatives the world has to offer and how they fare in comparison.

The eye-opening documentary demonstrates the central role oil has in our lives and our dependency on it. It assesses how foreign policy is impacted by the need for oil, with a particular focus on the US, and how this affects lives and society.

The concept of peak oil, in which the world reaches a maximum production for oil and then begins to decline, is also considered. Whilst most agree this will happen the timeframe differs significantly, with some experts believing we have already entered the period of peak production and others suggesting it could be more than 20 years away.

A host of experts and academics, from petroleum geologists to politicians, are interviewed over the course of the film. The interviews show a range of opinions, viewpoints and potential solutions or impacts oil use and dependency can have.

One of the key points the film makes is that we have failed to act as quickly and decisively as we should have done. As a result, governments, businesses and society have not planned or invested in the future to the extent that is needed.

The film takes a pessimistic view of renewable energy sources, claiming that currently alternatives to fuel cannot sustain the way we live now and as a result renewables are not a viable option on their own.

A Crude Oil Awakening will be of interest to anyone who wants to know more about the role of oil in our world and the repercussions of not adapting the way in which we live.