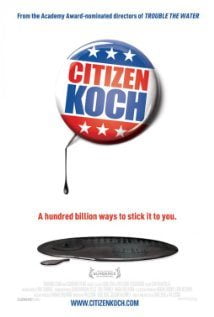 Citizen Koch explores the state of democracy in America and the fracturing of the Republican party. It argues that the US Supreme Court’s Citizens United ruling opened the floodgates for unlimited political spending, making it easier to buy an election.

The story and issues raised are told through the eyes of three Americans in Wisconsin who are all state employees and lifelong Republicans. The filmmakers show what happens when voters realise that large corporations and billionaires are funding politicians that don’t have the average citizen’s best interests at heart.

Citizen Koch focuses on what happened after the Citizen United ruling, which allowed corporations to be treated the same as individuals when it came to political donations, and the so-called Tea Party movement. The film claims that whilst the Tea Party positioned itself as a grassroots movement, it was actually a well-funded political operation that led to the Republicans making huge gains.

In Wisconsin, Republican Scott Walker wins the governorship and begins giving tax breaks to large corporations whilst reducing pension contributions and health benefits for state employees. It is then revealed that billionaires David and Charles Koch, co-owners of Koch Industries, are among Walker’s biggest financial supporters.

The film contains interviews with a range of organisations, including Americans for Prosperity, which was founded by the Koch brothers. It raises interesting questions about democracy in the modern world and who really holds the power.