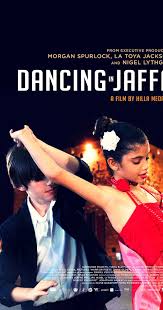 Jaffa in Israel is a city divided between two communities and decades of violence, but Pierre Dulaine, a four-time world champion ballroom dancer, attempts to bridge this gap by bringing children together to dance.

Over a 10-week period he teaches Jewish and Palestinian Israeli children to dance and compete together in an attempt to get them and their families to confront the issues around segregation and racial prejudice. Whilst he begins be teaching in segregated schools, Dulaine’s aim is to get the two groups to mix for a competition.

The film focuses on the complex stories of three of the children who struggle with a variety issues including poverty and the death of a parent. The stark contrast of protests taking over the city to the children forging relationships within one another highlights the decades of hated can be overcome and offers a glimmer of hope.

The filmmakers state, “Our film is ultimately about one man’s endeavour to shift the paradigm and stop the hate. More than anything we hope that Dancing in Jaffa can help transcend geographic and cultural boundaries by raising awareness of the challenges involved in dealing with hatred, while also proving that change is always possible, even in the direst of situations.”