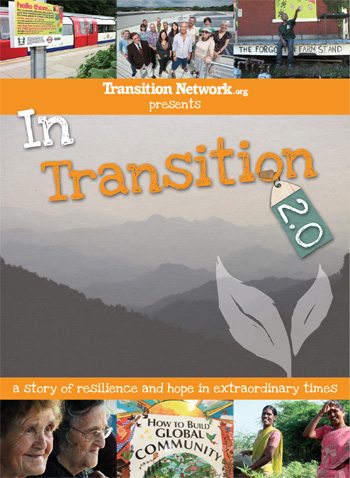 In Transition 2.0 captures stories from around the world about the Transition Network, a charitable organisation that helps communities create initiatives to build resilience and reduce CO2 emissions.

The organisation’s mission is to create a healthy human culture. The movement is described as a “social experiment that is about responding to uncertain times with solutions and optimism”.

One of the stories shows the Fujino Power Company in Japan, where following the devastating Tsunami and the Fukushima nuclear disaster, members of the Transition Fujino responded. They set up a community energy company with the intention of powering their whole valley using renewable energy. Their story demonstrates how a small group of people can have a hugely positive impact on their community.

Several of the projects shown are based in the UK, including the Lewes community solar power station in Sussex, the Brixton Pound in London and the Green Valley Grocer in Slaithwaite, Yorkshire.

Emma Goude, the film’s producer, said, “I want people to go away moved by what they have seen and feeling like they are as important as everybody else and what they do all adds up.”

As well as showing the achievements of various Transition groups, the film also address the challenges that they face when dealing with a range of projects and the solutions they have found to combat them.

Goude added that the film shows that the Transition movement “means business” moving forward towards creating a whole local economy within communities.