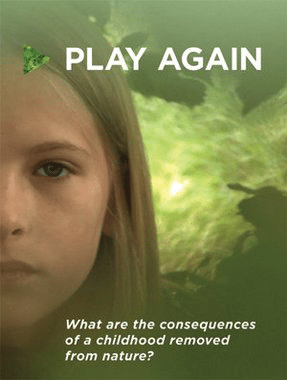 Documentary Play Again is an inspiring and touching story about the negative impacts of technological advancements and how it is affecting our children’s connection to the natural world.

The film looks at how technology and the virtual world will affect our children, our society and eventually the wider environment. It argues that if children don’t value nature, they will fail to protect it and as a result lose it.

The documentary follows six American teenagers who spend between five and 15 hours a day behind a screen, which is now average for and American child, as they go on a wilderness adventure and experience nature without electricity, mobile phones and other devices that have become increasingly used over the last few decades.

Children are filmed naming corporate brands but failing to identify plants demonstrating the impact of commercialisation and consumerism of our economy. Various experts speak during the course of the film including environmental writers, sociologists, educators, neuroscientists and geneticists giving weight to the films argument and call to action.

Writing in the Guardian earlier this month, columnist George Monbiot argued that today’s children “will be poorly equipped to defend the natural world from harm” because of their fondness of technology, and not nature.

Play Again investigates the consequences of a childhood removes from nature and aims to encourage us to take action and plan for a sustainable future where nature is considered.