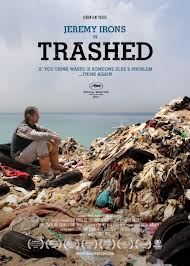 Trashed, staring Academy Award winner Jeremy Irons, looks at the dangers human waste is creating in terms of the food chain, environment and health. It assesses the damage that a consumerist society is doing to the land, air and sea.

The film reveals surprising truths about the immediate dangers we face because of the way we dispose of waste and the materials we use. Scientists, politicians and those that have been affected are interviewed during the course of the documentary, highlighting the impact and human cost of current waste disposal methods as well as the risks it presents to the environment and biodiversity.

One interviewee notes that we don’t think about the consequences when we throw products away. He adds, “We did it with smoking with the smoking ban, we did it with seatbelts, we did it with drink driving when that became unacceptable. We need to do this with waste.”

The filmmakers visit some of the most shocking examples of waste mismanagement, including open-air sites in Indonesia, demonstrating how it has an impact on waterways and communities. It also shows the extent of the waste in our oceans, much of which is non-bridgeable plastic.

The film ends by showing how the risks can be averted through sustainable approaches. Trashed will serve as a wake-up call for those that don’t consider what happens when they throw away waste.