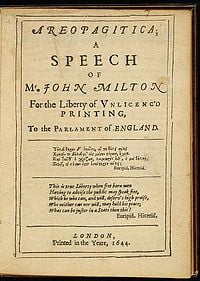 Three hundred and sixty-eight years ago today, John Milton published Areopagitica, and it remains to this day one of the most influential philosophical defences of free expression and speech, especially that of the press. With strong evidence that our press no longer reflects the view of the people, but of vested interests, when does press freedom slip towards propaganda?

Areopagus is a hill in Athens and it lent its name to a speech by the Greek orator Isocrates (5th century BC). Milton borrowed this title for his seminal pamphlet. As a protestant, he had strongly supported Presbyterian control of parliament after the civil war. Nevertheless, he objected to the Licensing Order of 1643, which required authors, such as Milton, to have a government approved license before their work could be published, and he wrote his 1644 pamphlet in response.

1. A text should first be “examined, refuted, and condemned” before it is rejected, rather than being prohibited by license before its ideas have even been expressed

2. Being educated involves reading “books of all sorts”, including “bad” books. We learn from their wrongs and discover what is true by considering what is not

3. Licensing printing cannot prevent societal corruption. “If we think to regulate printing, thereby to rectify manners, we must [also] regulate all recreations and pastimes…”

4. Licensing which adheres to the government’s current prejudice hinders the discovery of truth

5. Before licensing, books had to be inscribed by the printer’s name (preferably an author’s name). If any blasphemous or libellous material was published, those books could be destroyed after the fact

In the Leveson era, the lasting strength of Milton’s central arguments is evidenced, as it is these arguments that are still used and are as valid today as they were over three centuries ago. We will revisit this in more detail in our forthcoming Guide to Responsible Media.

The work has been so influential that it was cited by the supreme court in the US, interpreting the first amendment – the freedom of religion, speech, press and assembly. A quote from the text stands above the door of the New York Public Library: “A good book is the precious lifeblood of a master spirit, embalmed and treasured up on purpose to a life beyond life.”

“I run the paper purely for the purpose of making propaganda, and with no other motive” – Max Aitken, Lord Beaverbrook

One of the challenges for British democracy is our national ‘free’ press.

Broadcast media is heavily regulated for impartiality, but the press is able to blur the line between opinion and news. With the exception of the loss-making Guardian and troubled Mirror, the national press is wholly owned by wealthy individuals with strong political and economic perspectives.

The current band of press barons includes non-domiciles and alleged tax exiles, an ex-pornographer and an ex-KGB director. Two are foreign nationals, which would be prohibited in some countries, where the power of the press in shaping the national debate is recognised.

While their print reach is declining inexorably, this group of unaccountable fourth estate billionaires is able to reach 36% of the UK adult population every breakfast. Their online reach is also growing so they can still reach millions. It is the front pages and content of the national press, of all media, that is reviewed on radio and television news and current affairs programmes.

The brute power of reaching millions may have declined marginally during this frenetic period of media fragmentation, but it is still a brave or foolhardy politician who ignores the call of one of the barons and one of his editors.

“We’ve struck a gold mine!” – Alfred Harmsworth, Lord Northcliffe, during the Daily Mail’s first week in 1896

The other challenge of the press and its agenda is the basic economics of newspaper publishing.

The cover price that readers pay barely covers the cost of a newspaper’s ink and paper, never mind salaries, overheads and distribution, so 70-80% of the revenue comes from advertising. It has long been an idiom that, “He who pays the piper, calls the tune.”

With the heavy spending financial and motoring sectors being such a rich gold vein for publishers, it was always unlikely that the press would be too critical of their unsustainable and irresponsible paymasters. Financial services spent £841m on advertising in 2011, with £210m or 25% going to the press. Motoring spent £547m on advertising; £170m or 31% to the press.

Financial services, oil, gas and mining industries are major investment sectors (47% of the FTSE 100) and a key part of motoring’s value chain (manufacture, loans, insurance, fuel), so again they remain free from the necessary scrutiny by our national press. They certainly weren’t going to hold these sectors to account in the lead up to the credit crisis of 2007. They need the advertising shillings more than ever.

“Climate change poses clear, catastrophic threats. We may not agree on the extent, but we certainly can’t afford the risk of inaction” – Rupert Murdoch

It is surprising that despite this clear and mostly accurate statement, Murdoch’s newspapers have done so much to provide a platform for sceptics and pollutocrats and done so much to mislead the public. This is set out in this excellent article here, which illustrates the strong climate change sceptic position of his titles. This is the same man that owns the odious Fox News, where executives encourage journalists to deny climate change and viewers are less informed than viewers of other channels.

Whatever Murdoch says for PR reasons, his overall national press record is depressing.

A University of Oxford study of the tabloid press, including The Sun [prop. R Murdoch], Daily Express, Daily Mail, Daily Mirror and their Sunday equivalents, covering the years 2000 to 2006, found that, “UK tabloid coverage significantly diverged from the scientific consensus that humans contribute to climate change. Moreover, there was no consistent increase in the percentage of accurate coverage throughout the period of analysis and across all tabloid newspapers, and these findings are not consistent with recent trends documented in United States and UK ‘prestige press’ or broadsheet newspaper reporting. Findings from interviews indicate that inaccurate reporting may be linked to the lack of specialist journalists in the tabloid press.”

A two-year study of media coverage of climate change feedback loops by the Journal of Public Understanding of Science found that, “Non-US news organisations, especially in the UK, are at the forefront of the discourse on climate feedback loops. Poor US press coverage on such climate thresholds might be understood not only as self-censorship, but as a ‘false negative’ error.”

A 2010 University of Liverpool Study study looked at “prominent, disruptive direct action around the climate change issue, in the context of comparable activity across a range of political groupings”, and found that “they garner significant but unflattering attention from [the conventional mass media], partly as a consequence of the persistent pressures and imperatives that drive conventional journalism.”

A 2011 University of Oxford/Reuters Institute study of newspapers in six countries, called Poles Apart, stated that, “Newspapers in the UK and the US have given far more column space to the voices of climate sceptics than the press in Brazil, France, India and China. More than 80% of the times that sceptical voices were included, they were in pieces in the UK and US press, according to the research.”

Newspapers and their ill-informed, unqualified columnists might not be able to change people’s mind on the big issue of climate change. Fifty-seven per cent believe it’s real and manmade (anthropogenic) and 30% think it’s real. Nevertheless, the daily dripping and equal billing of climate sceptical opinion over scientific facts can lead to the impression that the science remains unsettled, the risks of inaction inflated and the necessary corrective action costly and unnecessary.

“Where the press is free and every man able to read, all is safe” – Thomas Jefferson

A free press is a vital ingredient of any functioning democracy. However, can our press be described as genuinely free? It has been captured by a narrow clique of supremely wealthy men, owners of larger commercial media empires. In turn, these empires depend on the largesse of corporate executives, operating unsustainable enterprises, who distribute advertising dollars. Estimated to be worth £692 billion globally by 2015.

How do we maintain the freedom of the press but avoid billionaires misleading the public?

Next week, Leveson will make his recommendation on press regulation, to be self-regulated or underpinned by statute. Just as Milton, we are very nervous of government or political oversight, but nor are we confident that the press, or more importantly the people who run it, are acting responsibly regarding the gravest threat to our way of life.

We will explore this and other issues in our Guide to Responsible Media this December.

Our final word goes to a surprising source; Bill O’Reilly is a polemical fixture of Fox News and has strong views on almost everything. However, he takes a profoundly different view to many of his colleagues and political allies on climate change. In a 2010 discussion with Bill Maher, he made the point that “a cleaner planet is better for everyone”. (Video here – watch from around 9mins).

We agree Bill. We need a rapid move to low pollution, low-carbon energy and industry.

If only our press barons and their commentators would make the case for that.