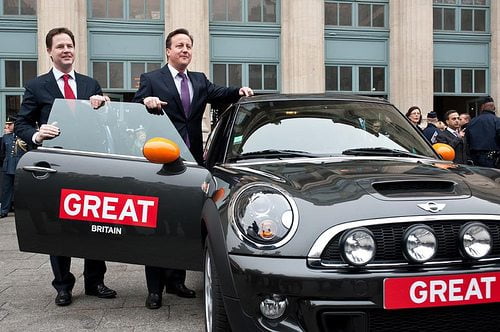 ‘If an election were held tomorrow, Ed Miliband would win by a landslide’

The headline for this piece is taken from a Daily Telegraph article from Wednesday. We imagine our readers will either be horrified or rejoice at the news. With 100 weeks to go until the next UK general election, we look at how the coalition is doing on its agreement and the prospects for 2015.

The 2015 general election will be fought under very different circumstances to the one in 2010.

The coalition parties, the Conservatives and Liberal Democrats (Lib Dems), will be trying to differentiate themselves after five years of governing very closely together. The economy may have started to recover. Scotland may have voted for independence (September 18, 2014) and a referendum on EU membership will play a central role in the general election campaign.

UKIP, which will campaign very loudly on this issue alone, will be a wildcard after another boost to its momentum following the European elections of 2014.

In 2010, an effective challenger could have easily beaten a tired and divided Labour party with an unpopular leader denigrated by the press.

– Deficit/surplus – the difference between tax receipts and government spending, which adds or subtracts from the national debt

The electorate, instead of handing the keys to number 10 to the then opposition, denied any party an overall majority.

The Conservatives gained 36% of the popular vote giving them 47% of the seats, just 3% and 20 seats short of a majority. The second most popular ‘party’ was ‘none of the above’, with 35% of the electorate not bothering to vote.

If those votes-to-seats figures look strange, such are the quirks of the first past the post system. The alternative proportional system distributes seats to reflect the actual proportion of votes. If you get 10% of the votes, you get closer to 10% of the seats. This was defeated in the AV referendum in May 2011, 68% to 32% on a 42% turnout. Electoral reform seems to be too esoteric for people to care.

The subsequent Conservative-Lib Dem coalition ostensibly formed to provide political stability, tackle the economic crisis and address uncertainty in the markets. It bound itself together with a 36-page coalition agreement.

Four areas of the agreement were of specific interest to us: banking, energy and climate change, environment and transport.

What the agreement says on banking

“In recent years, we have seen a massive financial meltdown due to over-lending, over-borrowing and poor regulation. The government believes that the current system of financial regulation is fundamentally flawed and needs to be replaced with a framework that promotes responsible and sustainable banking, where regulators have greater powers to curb unsustainable lending practices and we take action to promote more competition in the banking sector. In addition, we recognise that much more needs to be done to protect taxpayers from financial malpractice and to help the public manage their own debts.”

While the government claimed in January that the stability of banks had improved our banking system remains as unstable as it was before the crash.

Despite the Vickers’ review and various committees calling for better regulation, speculative investment divisions and retail banks remain integrated, despite promises of ringfencing. More scandals have ensued. The major banking groups still dominate the market and fail to lend to SMEs.

The reform of regulation from one three-letter abbreviation to another will have to prove itself in the next couple of years.

We need more sustainable banking and investment. Breaking up the big banks to increase competition and separating the investment and retail divisions to reduce systemic risk should be a core part of the next government’s manifesto.

The publicly owned banks should be broken up and mutualised to reenergise the mutual banking sector. Banks should only be allowed to draw on government money and guarantees only if they lend to the SME sector.

What the agreement says on energy and climate change

“The government believes that climate change is one of the gravest threats we face, and that urgent action at home and abroad is required. We need to use a wide range of levers to cut carbon emissions, decarbonise the economy and support the creation of new green jobs and technologies. We will implement a full programme of measures to fulfil our joint ambitions for a low carbon and eco-friendly economy.”

The resignation and fall from grace of Chris Huhne did not help. His successor Ed Davey has had to work with climate sceptic ministers and a senior partner party, which is deeply sceptical – and well connected to the fossil fuels lobby.

The creation of the £3 billion Green Investment Bank was a positive step. £1 billion for carbon capture and storage alongside the rise in renewables contribution to the grid is positive.

The decision not to create a decarbonisation target showed little leadership and messing with feed-in tariffs was disruptive to this infant sector; overall investment in renewables has fallen; the green deal is a farce.

Backing shale gas, gas-fired power stations and offering even more subsidies to energy intensive and fossil fuel industries smacks of business as usual. This hardly seems like the actions of a government addressing one of the gravest threats we face.

The UK’s capacity for cleantech innovation should make us a global leader in renewables. Our tidal, wave and offshore wind capacity could turn us into a net exporter of energy.

Rather than dithering over nuclear and fanning divisions over renewables, the government should support this infant industry with research and development grants, tax incentives and an unbiased public information campaign – that tackles head on the disinformation spread by the mainstream media.

What the agreement says on environment, food and rural affairs

“The government believes that we need to protect the environment for future generations, make our economy more environmentally sustainable, and improve our quality of life and well-being. We also believe that much more needs to be done to support the farming industry, protect biodiversity and encourage sustainable food production.”

The government’s relaxation of planning laws and abandoned plans to sell of forests has shown little concern for protecting the environment for future generations.  Illegally logged timber remains legal and there is no sign of a tree planting campaign. Our flood defences, as demonstrated last year, are in a shocking state.

We need to protect our environment. Brownfield sites should be used for development before any greenfield sites are touched. A land value tax would stop land banking by property developers and asset owners. We need a root and branch reform of how we support farmers, mitigating the hardship they face and encouraging sustainable practices and permaculture.

What the agreement says on transport

“The government believes that a modern transport infrastructure is essential for a dynamic and entrepreneurial economy, as well as to improve well-being and quality of life. We need to make the transport sector greener and more sustainable, with tougher emission standards and support for new transport technologies.”

While HS2 and Crossrail are bold developments, they do too little too late for the herculean transport challenge we face. Our roads are gridlocked, air capacity full and rail struggling under record passenger numbers. The coalition has boasted about a significant expansion in the road network – which is a recipe for greater congestion.

We need to invest in highly efficient, low-cost local rail and public transit. If we want our transport to keep moving, we need to charge more for inefficient road use. Modern transport infrastructure is digital communication and mass transit.

Does Labour offer a credible alternative?

Despite the Telegraph’s headline, we have yet to see enough of Labour’s detailed policies to determine whether they offer a sustainable alternative.

What we desperately need is the major parties to engage in an informed and serious debate about sustainability. Businesses, communities and individuals get it. It remains our nation’s loss that our politicians do not understand the gravity of the situation or are not willing to lead on this debate of vital national importance.

In the absence of real political leadership single-issue parties and voter apathy will keep rising.