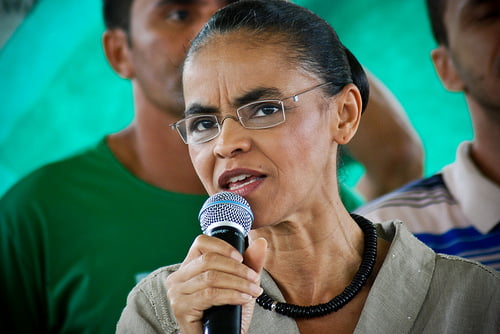 Over the next month, Charlie Wood will be profiling various politicians that have gone to great lengths to push environmental policies to the fore. First up is Marina Silva, former Brazilian minister for the environment and current leader of the Sustainability Network Party.

Marina Silva will be known to many as the lady who caused quite a furore when carrying her country’s flag in last summer’s Olympics, much to the chagrin of the Brazilian government.

Silva served as minister for the environment from 2003-2008 before resigning and switching from the ruling Workers Party to run as presidential candidate for the Green Party in 2010. She gained a remarkable 20% of the vote in the first round of the election, and although this was not enough to keep her in the contest, it demonstrated to the establishment the depth of feeling in this rapidly emerging country regarding industrialisation and preservation.

From the humble origins of a community of rubber tappers in the Amazonian rainforests, Silva became a leading activist against deforestation and environmentalism in Brazil, campaigning alongside legendary agitator Chico Mendes, who was murdered for his beliefs 25 years ago.

She became the first rubber tapper to be elected to the federal senate in the mid ‘90s, and began to build support for environmental protection and sustainable development in the Amazon region.

Her time in government is marked with ecological triumphs, including a massive decrease in deforestation, as well as staunch criticism – mostly from agribusiness corporations frustrated by regulations but also from environmental groups suspicious about the true breadth of preservation policy.

That said, the loss felt by the environmental lobby in Brazil following Silva’s resignation from government was neatly summed up by Greenpeace Brazil director Sérgio Leitão, who noted “it [was] time to start praying” for the rainforests. Silva resigned in May 2008, citing problems carrying out her job.

In February of this year, she launched the Sustainability Network, and is widely expected to run for president again under this banner in 2014. She is promising to lead an open, responsive and inclusive party that will not take a prejudged stance for or against the governance in an attempt to break the ‘herd mentality’ within Brazilian party politics.

Understandably for a party that is less than a month old, there is little in the way of firm policy positioning, save for a commitment to protecting the environment.

Spokesperson and party organiser Pedro Ivo Batista announced that Silva’s party will push for “a sustainable future and seek to break the monopoly of traditional political parties”, adding that they “want a new way of conducting politics, bring politics to the people, use the networks of civil society”.

This type of rhetoric is nothing new to political watchers, but the presence of Marina Silva on the frontline of Brazilian politics can only be good news for the Amazon, and for the global environment. There are still high hopes for the girl from the rubber tree plants.