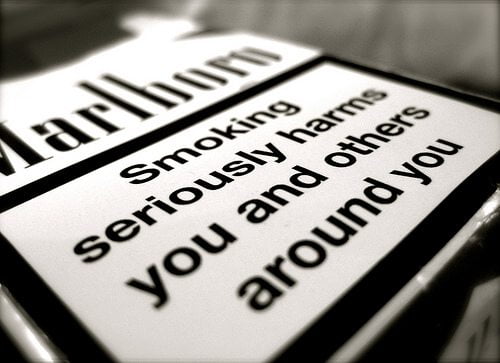 It was 56 years ago today that a 25-year Medical Research Council study confirmed that smoking caused cancer. Tobacco firms rejected the assertion as a ‘matter of opinion’ and it was another 50 years before a full smoking ban in public places came into effect.

Over the 12-year period between 1945 and 1957, the death rate from lung cancer had doubled. The only discernible cause from 21 investigations in six countries was smoking cigarettes.

At the time, the government stated there was to be no ban on smoking and certainly no limits to smoking in public places such as theatres, cinema and public transport. Instead, public information and awareness campaigns would apparently address the issue.

It was another five years, and only after a Royal College of Physicians recommendation, that the government acted to establish serious changes such as restrictions on advertising; higher taxation; more restrictions on sales to children and on smoking in public places; and requirements to publish information on tar and nicotine content. Cigarette sales fell for the first time in a decade.

The £600m of tax receipts was cited as a reason for not introducing a total ban.

In 2010, tax receipts from smoking were £10.5 billion but the estimated total cost of smoking was £13.74 billion (although this could be £2.5 billion higher). This includes the £2.7 billion cost (which could be £5.2 billion) to the NHS but also the loss in productivity from smoking breaks (£2.9 billion) and increased absenteeism (£2.5 billion). Other costs include: cleaning up cigarette butts (£342m), the cost of fires (£507m), the loss of economic output from the death of smokers (£4.1 billion) and passive smokers (£713m).

The full cost on children’s health from inhaling parents’ smoke is hard to quantify and impossible to justify. Despite the ban on cigarette sales to under-16s, 200,000 children aged 11-15 start smoking each year.

We now know smoking causes 25 different diseases including heart disease and strokes. Every year over 100,000 people in the UK die from smoking -related diseases: impressive for an industry which employees only 5,700 people. Tobacco’s war against humans is being won.

By 2020, the World Health Organisation expects the death toll to reach 10 million per year, and be responsible for one in five deaths in the developed world.

There are 1.1 billion smokers in the world with three quarters being in the developing world.

Many investment managers and advisers describe tobacco as a good defensive stock because it is resistant to general consumer market conditions (mainly because it is addictive and is growing in countries without public health information and awareness campaigns). This argument generally disqualifies people from being members of the human race.

The tobacco industry persisted until very late in telling anyone who would listen, that the science was a ‘matter of opinion’.

A small number of scientists, media commentators, politicians and business leaders still argue the climate link is a ‘matter of opinion’. It is time these charlatans and disinformation spreaders lost their last vestiges of credibility and the platform from which to spread doubt and lies.

The burden of proof needs to be reversed. Incumbent industries that profit from environmental and societal impacts need to prove beyond reasonable doubt that they do no harm, rather than the rest of society proving that they do.