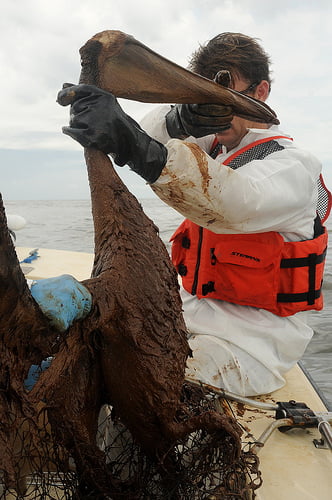 Forty-six years ago today, over 10,000 tonnes of crude oil spilled out of the supertanker Torrey Canyon and into waters just off the south-west coast of England – in what was only the fourth spill in history. Nowadays, many more than this number occur every single year.

Despite the Torrey Canyon incident being over four decades ago, it remains one of the UK’s worst oil spills. It affected hundreds of miles of coastline in the UK, France and Spain, killed innumerate marine creatures and seabirds and put significant pressure on the government and the armed forces, which many claim failed in attempts to efficiently manage the disaster.

Charging the ship’s owner might have been seen as though the guilty had been brought to justice, but in reality, the authorities at that time failed to recognise the enormous environmental impact the oil industry would have for years to come.

There have been several major oil spills since Torrey Canyon. The 2010 Deepwater Horizon incident is one of the worst, with over 600,000 tonnes of oil spreading into the Gulf of Mexico from BP’s rig.

But there are many spills that have gone relatively unnoticed – perhaps because they occur too far from our eyes. Many have happened, for example, in African countries like Namibia, Angola, Mozambique and Nigeria, and yet, we hear little about them.

Although it’s hard to estimate the precise amount of oil that has polluted the marine environment through the years, there are two things that are quite certain.

First of all, these incidents have occurred regularly in different countries and in different contexts. This means that this industry is unstable and has failed in guaranteeing the safety and control of the product it extracts and sells around the world.

The second assumption is that whenever these events have happened, there have had unpredictable and horrific consequences on the environment. Pollution reaches overwhelming levels when a spill occurs and many species of animals are sentenced to death when the oil enters their organs or goes into their digestive system.

The large list of tragic oil spills should at least raise concerns and questions about our energy and environmental futures. Should we keep going this way or should we start questioning our lifestyle and our choices?

Oil spills remain the one of most destructive facets of fossil fuels, and provide strong arguments for cleaner sources of energy. The US government’s decision to stop Shell from drilling in the Arctic for safety reasons is a small step forward in recognising the harm we’re causing to our fragile environment.

It’s time to change, whether this means modifying our lifestyles, consumption habits or investment decisions. It’s time to leave the past – and its many oil spills – behind.