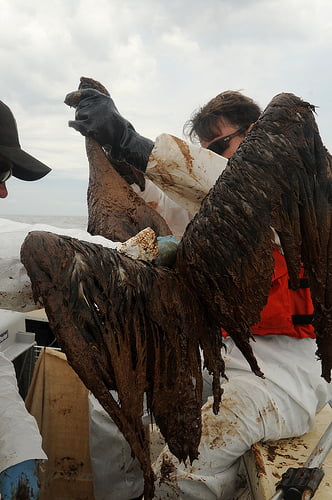 Three years ago today, the world experienced the largest oil spill in history, when BP’s Deepwater Horizon oil rig in the Gulf of Mexico exploded, releasing 5m barrels of oil into the surrounding environment.

One year later, a US court found the British oil giant guilty of negligence. It was claimed that the quality of its rig wasn’t sufficient, and its safety measures were lacking.

We expressed doubts about these fines at the time. Although they might have seemed considerable, they represented a minor percentage of the company’s huge profits.

Did the fines make up for the huge social and environmental impact of the spill? Let’s look at its impact.

The marine habitat was severely damaged and many species of birds, fish, crustaceans, mammals, including 26 endangered species like turtles and whale shark, died after being suffocated by the spilt oil.

Images of seabirds covered in petroleum sadly became symbols of the event.

The environmental effects of the spill are still visible today, while the long-term effects are as yet unknown, as oil can affect the marine and human ecosystem by staying in the food chain for decades.

Eleven workers lost their lives in the explosion. BP pleaded guilty to manslaughter and agreed to pay compensation, though it is difficult to image a life may ever have a specific price.

Impacted residents and workers are still facing consequences on their own health, such as liver and kidney damage and throat irritation, caused by toxic chemicals released during the spill. Again, if they have long-term health effects, it will only be revealed in the future.

The spill also had a huge impact on the economy. While BP faced huge losses, the local economy struggled to restart, too.

The US Travel Association quantified $23 billion losses over three years in the tourism industry, where about 400,000 jobs are generated and $34 billion profits are made every year. Housing sales decreased significantly as well.

In an effort to rebuild trust, BP has often announced financial help to boost tourism in the affected areas.

Nevertheless, the company’s PR machine is working tirelessly, with BP saying recently that the spill was not only its fault, and that it is also helping to restore the economy in the area.

So, is the compensation enough for all the damage that has been done? Probably not. The long-term adverse health and environmental effects are still unknown and immeasurable – though are likely to be severe.

Have BP and others in the oil industry learnt their lessons in the three years since?

Considering the recent big oil spill in Arkansas by Exxon Mobil, and Barack Obama’s hesitations over the Keystone XL pipeline plan, there is evidence to suggest they haven’t.

The question is, how many more environmental catastrophes are we going to have to put up with before we truly commit to a clean, renewable, safe energy future?