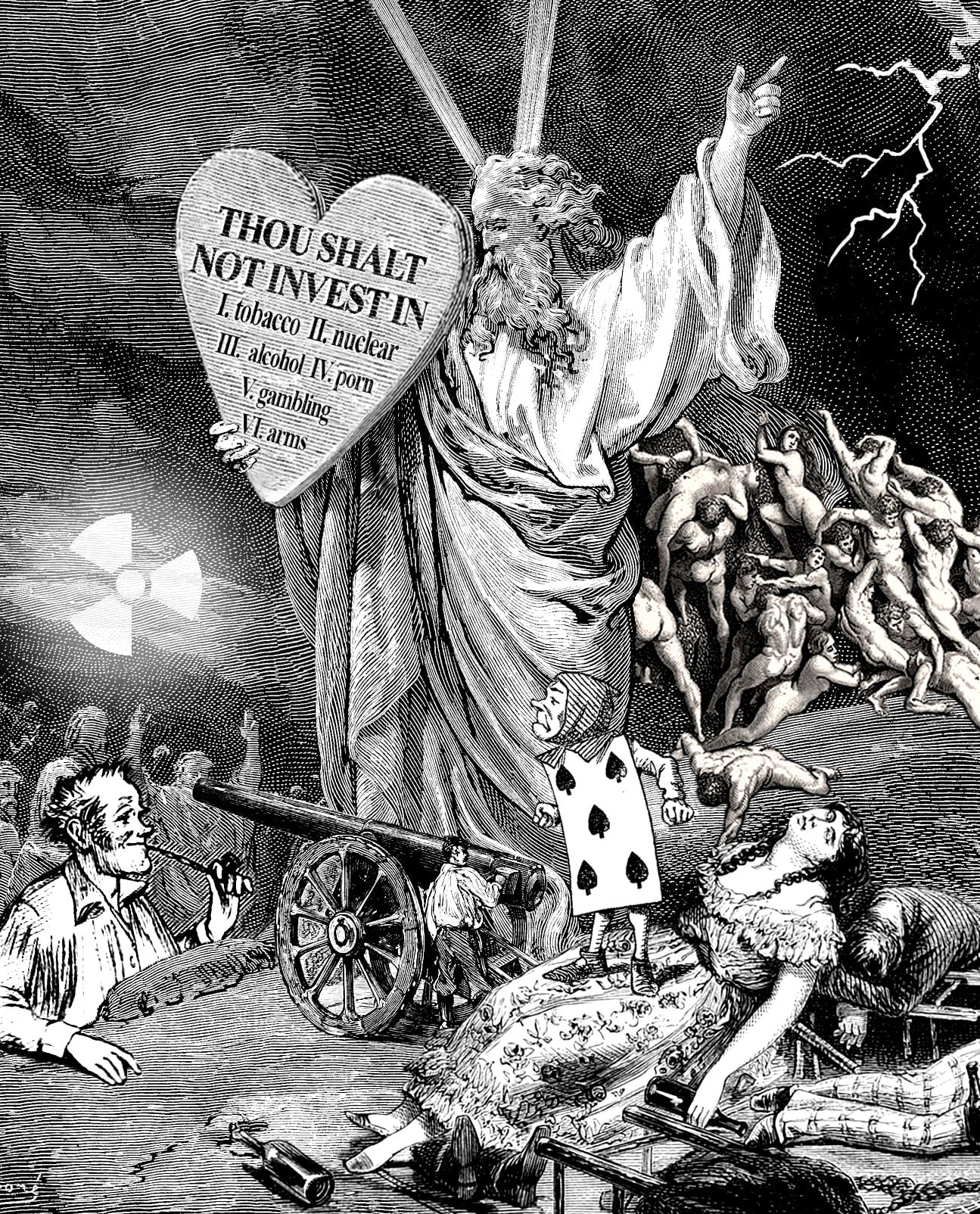 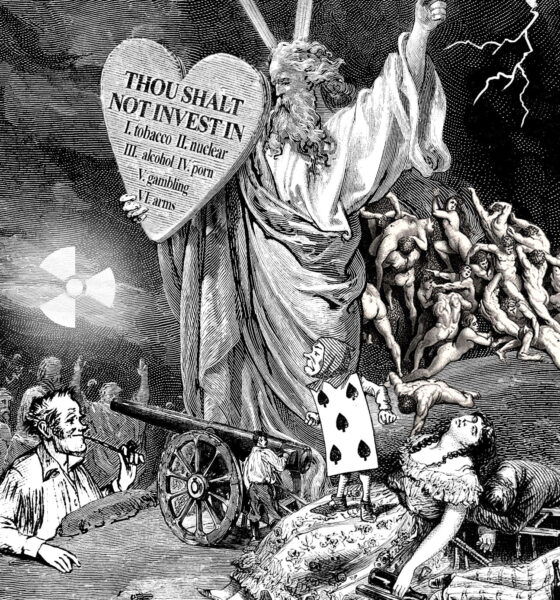 Once a month, we’ll be publishing a topical cartoon created by Polyp – a Manchester-based cartoonist who has designed images for the New Internationalist, Friends of the Earth and War on Want, among others. The series, called B******* as usual… began this afternoon, with this entry.

We’ll also be collaborating with him for our monthly guides, and in fact, the partnership began in our Guide to Sustainable Investment 2013 when he created the excellent image to the left regarding the investment ‘sextet of sin’ (click here for a larger version).

To introduce Blue & Green Tomorrow readers with Polyp’s work, we threw a few questions at him via email about his career and his love for cartoons.

This is what he had to say.

How would you describe your work?

John Pilger said they were “a bit ruthless” which I loved. “Acidic” is my favourite term.

Where does your interest in cartoons and the issues you draw about come from?

I’ve just always been interested in cartoons and comic books since I was a kid, I’ve no idea why. Maybe it’s the power of being able to turn a blank sheet of paper into anything you want? I loved Lego, so maybe it’s about creating these imaginary objects and then playing with them?

My interest in politics came from watching Arthur Miller’s The Crucible and wondering if people in the future were to look back on this society, what would prompt them to ask, “HOW could they have DONE that to each other?!”.

The answer seemed really obvious, and hit me like a brick – that we let kids starve to death. When I started looking into it at the student’s union, I was just appalled to find injustice was at the root of it all, rather than simple misfortune, and that really politicised me.

How much do the cartoons reflect your own views on the issues?

Pretty much 100%. I take some stuff on trust from the campaign groups I work for, and assume their research is solid, but I try and be really careful not to attack anything unless there’s good evidence to justify it.

Most of the things I say are trying to tease out the really obvious ethical outrages I see around me: people assuming it’s OK to be billionaires when others go hungry doesn’t really need much research to back it up.

No-one’s yet insisted I take a point of view I don’t agree with, though there’s been a few close shaves and heated arguments.

What makes a good satirical cartoon?

For me it’s about distilling down an ethical issue to its bare roots, and trying to capture that feeling people have – that there’s something wrong with a situation, and they can’t fully articulate it.

And of course it takes a lot of chewing pencils and thinking to get me to the point of articulating it clearly, as well.

But once there, I’m often struck by the fact that in the middle of a political argument, I get frustrated with words and just want to whip out one of my toons: “Hands speak for me!” as it says in Shakespeare’s Julius Ceasar.

Though I’ve not stabbed anyone with a cartoon yet.

One thing a lot of political cartoonists get wrong is they have no love of the rhythm and nuance of words, and so they write excruciatingly laboured, leaden, didactic dialogue and can’t understand why people then cringe.

What impact do you hope they have on people?

When I’m sat there drawing them I feel like I’m tightening a noose around the necks of my targets. I want to block off every avenue down which they can slither to escape the implications of what I’m saying – the message about the fundamental morality of their behaviour.

I’ve been known to snarl out loud and say, “Let’s see you wriggle your way out of this one, you little fuckers!”

I really like to imagine them squirming. Pilger’s right: I’m not a goody-goody nice guy; I have a mean nasty cruel streak, and hope I’m putting it to good use.

Which issues do you most enjoy creating cartoons about?

Ones where I can give free reign to my nasty streak and give someone a really good kicking.

I imagine some people get rather angry at some of the cartoons? How do you react?

I get angry back! I get furious about the high handed defensive kneejerk ‘more-politically-correct-than-you’ nonsense I sometimes have to listen to. Particularly if I stray into any of the green, liberal, lefts, sacred cow fields. And there’s a LOT of those! Acres and acres.

This cartoon about the burqa got a really feeble response along the lines of, “Well I think you’ll find not ALL burqas are black, some are quite vivid colours, so your cartoonist is being racist.” I’m parodying a bit here, but not that much. 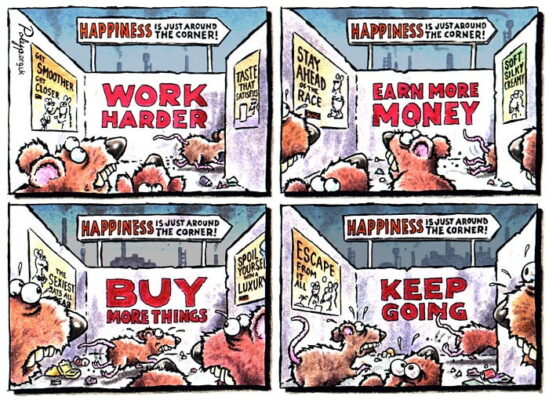 It’s hilarious when you can so easily tell the person just doesn’t want to acknowledge and engage with the point you’re tackling, and so lashes out irrationally just in order to complain.

I’ve had one orchestrated complaint letter writing attack, and they can be pretty intimidating. You have to stand your ground and keep calm. It’s really important, once you’ve had the initial idea, to try and anticipate misunderstandings or wrong interpretations. But the kneejerk thing really annoys me. On Facebook, at least you can battle these things out and face your accusers in real time.

Oh, and because I’ve done cartoons debunking and ridiculing ‘political’ conspiracy theories, I get told I’m a shill for the New World Order. I love those! They make me happy.

You’ve done many cartoons about climate change. Why do you think the issue makes for good satire?

It’s so emotive. Lots of my stuff is about stepping back from everyday life and trying to look at what we’re doing from a different and hopefully more clear and sane perspective. And ecocide is a godsend for that. WHY are we committing collective suicide when we don’t HAVE to?!

The If ordinary people behaved like… series is interesting. Where do you get your ideas and how easy is it to find companies to satirise?

If ordinary people… just fell out of the pen and wrote itself. But I stopped doing them because I didn’t want to get repetitive. They’re the perfect example of what I was talking about above – distilling things down and stepping back for a new perspective on things.

The difficult bit was choosing which company to label them, since so many of them do the same appalling behaviour.