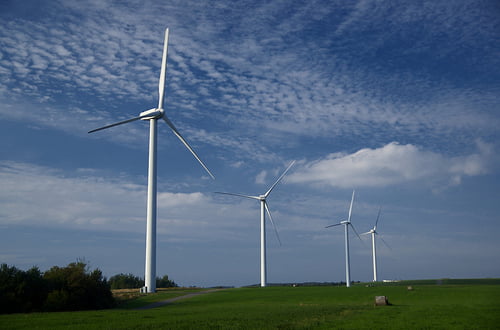 At the end of this month, we will be publishing our Guide to Renewable Energy. Simon Leadbetter explores some of the issues around one of the four foundations of a blue and green tomorrow.

B&GT writes about sustainability in four areas: what we invest in, how we travel, how we create energy and what we buy or consume.

Renewable energy (wind, solar, hydro, tidal, wave, geothermal) generates a highly charged debate with very little real insight. As we have often witnessed, there seems to be little desire to let science or evidence get in the way of a strongly held prejudice.

On one side of the debate, there are those who feel that renewable energy is an expensive subsidy junkie, inefficient, intermittent, unreliable and an eyesore – probably all of the above. To this group, fossil fuels are the simple answer, as they are currently available, relatively cheap, with high energy density and dependable – we’ve been burning coal for about 5,000 years.

On the other side of the debate are those who see a limitless supply of clean energy from domestic natural sources such as wind, sun, tides, waves, rivers and geothermal.

Hovering between both positions is the potentially explosive issue of nuclear power.

The debate is so heated, that those who support renewable energy have resorted to euphemisms to describe it, such as ‘good’, ‘green’, ‘new’ and ‘alternative’. Renewable energy was always a misnomer;  a more accurate name for these sources would be ‘clean’ or ‘limitless’ as opposed to fossil fuels which are dirty and finite.

Our position is simple. Relying on fuel sources that are running out; have been one of the major causes of war, environmental degradation and health problems; and have to be imported from unstable or unsavoury regimes is unsustainable.

New technology represents a huge strategic opportunity in research and development, something that the British are particularly good at, which would be a boon to our intellectual property and export industries.

New technologies are often expensive and inefficient in their early days – the first computers cost billions at current values and filled warehouses. Costly prototypes need to be developed and some technologies will fail. Such is the burden of innovation. However, anyone who argues that nuclear, oil, gas and coal have not had a smorgasbord of subsidy during their developmental period is dishonest or delusional.

We'd go for the left image over the right every single time.

Those who argue against clean and limitless energy due to its reliance on subsidy should naturally oppose the future development of nuclear, coal, oil, gas energy and innovations such as the internet, the aeroplane, landing on the moon, and medicine as these all depend on massive subsidies of education and research. Cars have only taken off as the preferred mode of transport because the Government subsidised road building.

Regardless, while it was expensive in its early days, the price of solar and wind energy will reach parity with, and then become cheaper than, fossil fuels in a few short years.

Arguments about intermittency are also misleading, as it has been demonstrated that a combination of clean, limitless and domestic ‘renewable’ sources can easily create the base load we require. The North Sea is a terrifically windy and wavy place, the sun almost always rises and it’s about 650 – 1,200 degrees Celsius 80-100km beneath the earth (22.1°C per km of depth). You can boil a kettle at 5km. For reference the deepest oil wells are over 12km.

We also sit on several of the largest tidal flows in the world. We know the movement of tides to the minute unless someone’s nicked the moon since we last checked.

We are close to storing intermittent sources too so the problem of intermittency simply goes away. Technology has a tendency to progress, which those who favour fossil fuels seem to be in denial about when it comes to renewable energy. Those pesky scientists and their evil plans for progress.

Reliability comes with time and anyone who witnessed the Kuwaiti oil fires, Torry Canyon, Exxon Valdez, Deepwater Horizon, Three-mile Island, Chernobyl and Fukishima, might want to question the reliability of fossil or nuclear power sources. Do Russia and the Middle East feel like a particularly reliable source to anyone?

When it comes to nuclear power, we think it is a genuinely dangerous distraction from focusing on clean, limitless and domestic energy. If you accept nuclear as part or all of the solution, you are committing the country to the biggest subsidy junkie, endless problems with radioactive waste storage and the national security issues around proliferation. If we, the UK, can have civilian nuclear power, why not Iran?

All of this circles round to energy efficiency.

We can have a domestically produced, clean and limitless energy supply but we can also massively cut our usage and costs through energy efficiency. By insulating buildings, developing new efficient technology and investing in high-speed mass transit such as rail, we can massively drive down domestic and commercial energy use meaning we need to generate less electricity.

This makes economic and environmental sense for individuals, businesses and government. Reducing the pollution from burning fossil fuels also makes sense for the health of our people and the finances of our health service.

There are two futures.

Imagine a country with a cheap and limitless supply of clean, domestically produced energy, which can export the excess energy it produces. Imagine a country that leads the world in clean technology and energy efficiency with tens of thousands of new jobs created to insulate our buildings and develop, build and install valuable and exportable innovations. Imagine emptier roads and clearer skies as more and more people and goods travel by high-speed rail. Imagine a self-sufficient, confident nation.

Or, imagine inexorably rising energy bills that depend on the vagaries of commodity market speculators and foreign dictators, ever more wars to protect our fossil fuel supplies. Imagine a nation that abandoned a lead in world-class innovation to focus on inefficient and dirty technology. Imagine gridlock on the roads and ever-expanding airports. Imagine a nation in decline.

It is abundantly clear that vested interests that depend on the current energy model and have deep pockets are spending millions on propaganda to preserve the status quo that benefits the few – them and their shareholders. They have many powerful, well-rewarded friends in politics, business and the media who will happily bang the drum. But, follow the money and, corny though it is, think about the future you are creating for your children with your choice of energy supply.

We choose clean, limitless and domestic energy every time.