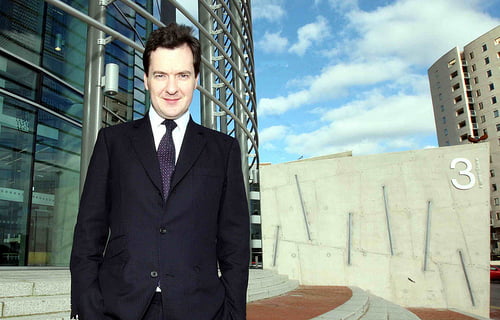 The budget takes place this Wednesday. Faced with the loss of the UK’s AAA rating and the inexorably rising public debt, the chancellor will feel his hands are tied and tens of billions of pounds worth of further cuts need to be proposed. This is the speech we want to see.

There is no other road to a genuinely sustainable long-term recovery.

The three areas that are most important in that sustainable development are energy, transport and communication. Climate change is real. The scientific consensus is overwhelming. More broadly to climate change, rising pollution and wasteful resource use represent clear and present dangers to our children’s future.

Stability and certainty are the foundations for business investment. Relying on volatile energy prices and imports does not provide that foundation.

The United Kingdom can lead the world in tidal, wave and wind energy – we are an island with some of the greatest tidal ranges in the world, and are surrounded by waves. Our offshore potential, if properly exploited, could make us a net exporter of energy and guarantee our energy security for future generations.

If we follow the example of Denmark and aim to become 100% renewable in our energy supply, our air will be cleaner, people healthier, energy prices less volatile, long-term domestic bills lower, our energy intensive industry massively more competitive and we will create a valuable export industry. The UK should be seen as a beacon for renewable energy, in these areas, globally.

Today I am setting up a £2 billion fund to support university places and postgraduate research and development in the area of clean technology, with the objective to create spin-out enterprises and valuable IP. This will be distributed in such a way as to strengthen existing centres but also to establish new centres of excellence across the UK.

Funds will be awarded in a transparent, public competition between universities, led by leading academics, investors, entrepreneurs and current developers.

The fund will also establish bursaries for those wishing to study practical courses, such as engineering, agriculture, and in other areas of sustainability.

But I will go further. While investing in other countries’ renewable capacity creates valuable returns for UK investors, we need to build domestic capacity. We must encourage private investment in this critical space. I am doubling the limits on money raised for Enterprise Investment Scheme and Venture Capital Trust allowances for companies that develop domestic renewable energy projects.

I am also setting up a £6 billion clean innovation fund to match pound-for-pound, investment in domestic clean technology and renewable innovations. This new fund will be added to the current £3 billion, already allocated to the Green Investment Bank.

But making energy generation stable and cleaner is not the only lever we have. We can also look to reduce energy consumption. On average, it would cost £250 to loft insulate a typical home in the UK. We have 26m homes. It would cost roughly £6.5 billion to insulate every home in the UK. This cost led to the timid decision to launch the Green Deal.

The Green Deal is overly complex and ineffective, with a tiny take up. Today we are making £1 billion available to fund the insulation of the poorest households in the UK. Those facing the harshest fuel poverty will see their bills fall and when coupled with future energy certainty will be able to plan and budget accordingly.

We will also be providing additional funding to further education and technology colleges to ensure we have the right number of appropriately skilled assessors and insulators.

Transport represents a fifth of our emissions.

We must reduce road traffic if we are to create a sustainable future. Building ever more roads has proven to be an ineffective way to cut traffic. Raising road taxes has become politically unacceptable and represents a regressive tax on the poorest who live in the most isolated areas. While we will look at ways of reintroducing the accelerator in a more acceptable form, we need a credible alternative today. Road charging simply moves cars around the system, often off safer roads onto narrow country rat runs. Road freight clogs up the system further.

More domestic airport capacity is both economically and environmentally unsound. A third runway at Heathrow is unnecessary if we move domestic capacity out of the skies. The UK has the 18th largest railway network in the world but the sixth largest economy. We have the busiest railways in Europe by a long margin.

In 2009, the Association of Train Operating Companies identified 14 commercially viable schemes to connect communities of 15,000 or more people with 40 new stations and new lines. The cost of all these schemes was £612m. I am making this money available for the schemes to progress. 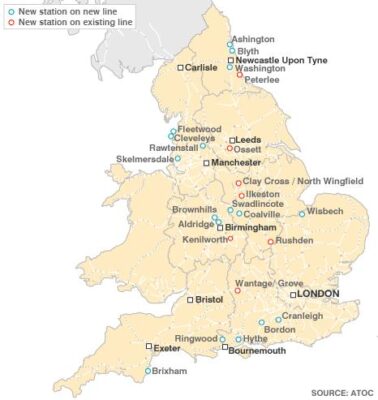 But we can go further. Today I am launching a Royal Commission on UK Rail Strategy. Led by a leading academic it will investigate reversing those Beeching cuts that are reversible, reopening stations to serve more communities – especially those with no rail connections, deploying light rail over a wider area connecting with mainline hubs.

We will press forward with High Speed Two.

We will go even further. The commissions will investigate the economic case for renationalisation or mutualisation of Network Rail and the Train Operating Companies – a case which is overwhelmingly supported by British people and which has been ignored by politicians for too long.

But simply moving more people around more efficiently the country is a 20th century economic model. We can create more capacity on roads and rail, and faster travel times for those who have to travel, if we encourage more people to use technology to communicate.

Technology means more and more people can homework, video and teleconference.  Twenty-four per cent of households still do not have broadband access and superfast broadband is far from universal. We are making £2 billion available initially to roll out superfast broadband through fibre and wireless technologies.

Again, this will be awarded to those telecoms operators who develop the most compelling and cost effective solution to reach as many people in the UK with superfast broadband, paying particular attention to those communities not currently enjoying broadband.

We also have a housing shortage, which will only grow over the next few decades. We are creating a £3 billion fund, which local authorities can compete for  to create new ecotowns. We must protect the greenbelt and resist urban sprawl, so urban areas currently with lower than average population density, some population growth and proximity to national rail networks that are outside the south east will be given priority.

This is an opportunity for the regions to secure much needed investment and infrastructure. I encourage local authorities, construction firms, local communities and renewable energy companies to collaborate to win these funds, with the most imaginative proposals.

We are committing to £15 billion of stimulus activity borrowed at the lowest interest rates in nearly two centuries.

But we must pay for this and keep our deficit and debt under control.

It is unacceptable that we spend scarce resources on technology to defend us against the last century’s cold war threat, a nuclear war, rather than investing that money on defending us against a 21st century threat, climate change.

Our conventional forces will be strengthened while we have made the difficult decision to not renew a submarine-based nuclear deterrent, Trident, to free up in excess of £100 billion. This will allow us to fund clean technology growth, improve our transport infrastructure and insulate millions of homes and we will be targeting those in greatest fuel poverty in the first instance.

We will also explore the implementation of a Pollution Added Tax, which means those who pollute will pay the full cost of their activity. For too long, businesses have been allowed to externalise the real costs of their pollution, while internalising any profits, such pollution causes.

It is estimated that air pollution alone costs £9-19 billion a year and we will look at the most effective way to recover most if not all of that damage. Direct environmental effects such as the dumping of waste into rivers, will be charged to business through exemplary damages that cover the full cost of a clean-up.

But we will go further. We are keen to create a competitive economy. Upon the implementation of the Pollution Added Tax, we will also introduce a graded corporate tax, with the lowest rate at 10% for the least polluting industries.

Proposal on both measures will be put forward during the next 12 months.

This will be a further incentive for clean technology and disincentive for those who pollute the air, the lands and seas.

This is a budget, which will provide long-term stability and certainty. It will ensure that hard-pressed families see align energy bills over time and our most energy intensive industries can compete on the global stage; it will build a valuable world class export sector.

Our policies on transport will get our economy moving and our policies on communication will ensure all of our communities are connected.

It is time for the United Kingdom to take its place as a 21st century economy, facing 21st century challenges, rather reliving the past glories of a bygone age and fighting the battles of the last century.

I commend this budget to the house.