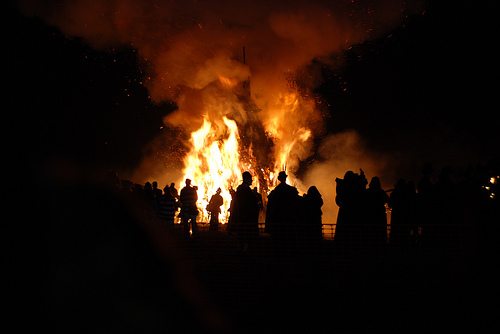 Top tips to make your Bonfire night an environmentally-friendly celebration

It is traditional to mark Bonfire night, which began as a gloating Protestant and monarchist celebration of the failure of Guy Fawkes and his Catholic conspirators in exploding King James I, by ooh-ing and ahh-ing at crackling bonfires and booming fireworks.

But while they are not quite on a par with attempting to blow up the House of Lords, starting a fire in your back garden or setting off miniature explosives are themselves rather destructive acts.

In 2012, the Department for Environment, Food and Rural Affairs (Defra) claimed that bonfire night celebrations had a worse effect on the UK’s air quality than the annual emissions from all of the country’s waste incinerators.

With this in mind, there are a number of ways you can limit the environmental impact of your own bonfire night celebrations.

Perhaps the most obvious and most enjoyable way to have a greener bonfire night is to take the family to a public display, rather than staging your own. The Environment Agency recommends such events as they produce less pollution than the potential combined contributions of everyone attending them. And, let’s face it; their display will probably have slightly more professional choreography than yours.

But if you are hosting a traditional back garden bonfire, try to keep the blaze as small as reasonably possible. Also, try to burn only dry and untreated wood such as logs and branches, in order to minimise the levels of chemicals released by the fire.

Use kindling to get the fire going rather than firelighters and fuels such as petroleum or oil, and before you do, think of the poor hedgehogs and check that no garden critters have mistaken your assembled bonfire for a five-star hotel before striking the match.

Eco-friendly fireworks are available, if a little hard to find. If using conventional fireworks, its probably best to keep the display short and modest. Showing off in front of your neighbours is pretty important, but not as important as our climate. Multicoloured fireworks, while they may be the most dazzling, contain the most chemicals, while bigger bangs will only cause more stress for local pets and wildlife.

Remember, remember, the fifth of November. But don’t forget the environment.