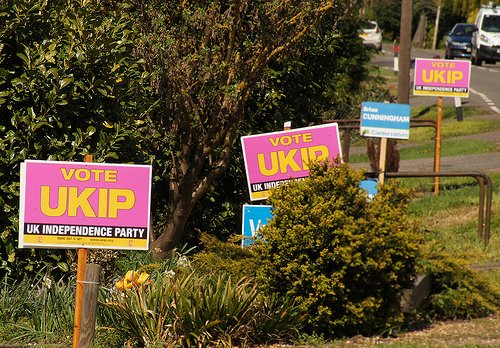 The electoral rise of ‘others’, spoiled ballot papers and none of the above options demonstrate that democracy is going through a period of systemic change. We should embrace it, as it injects energy into our moribund political system.

She had said on the day before the election that she was confident of her party retaining fourth place, but it was pushed into fifth by the impressive performance of UKIP. She was right on the first point.

This was a local election with a typically low turnout (31%). Smaller parties often enjoy the opportunity to surge a little at these times, as voters give the main parties a kicking. Nevertheless, no one can deny or ignore that UKIP’s capture of 23% of the popular vote and coming third overall, was both impressive and dramatic.

If UKIP can consolidate its position during next year’s European elections, which, at the end of the day, is its core manifesto issue, it may well position itself to win parliamentary seats in the 2015 general election.

One of the challenges for UKIP is that once its popularity grows, its somewhat ill-thought out policies come under closer scrutiny. Flat rate lowers taxes and higher spending aside, its attitude towards climate change and renewable energy are frankly barmy, but play well amongst certain groups. It takes a highly sceptical attitude to both.

UKIP MEP Godfrey Bloom claimed in an email, “The charm and frustration of UKIP is we have doctors who fancy themselves as tax experts, painters and decorators who know all about strategic defence issues and […] retired dentists who understand the most intricate political solutions for the nation.”

It seems that they are all climate scientists, too.

In reality, UKIP has been used as a big stick to beat up the three main political parties by a frustrated and generally impotent electorate. To a lot of voters, Nigel Farage sounds like an eccentric but straight-talking man of the people, notwithstanding his private education and commodity trading past.

He’s certainly seen as an improvement on the tightly controlled, soundbite-ridden, never-answer-a-question, double-speaking of most politicians.

The rise of UKIP should give all smaller parties hope

UKIP’s success shows that smaller parties can break through, just as the Lib Dems did before it.

The closeness of the three main parties on many issues has led to voter turnout being 65% in 2010. While up from 61% in 2005, a third of the electorate are too apathetic to vote or feel no major party represents them.

Reading the Green party’s manifesto, we’re not sure it understands the pragmatic and (small c) conservative nature of British electorate as well as it should.

While the Green party secures only 1% of the vote in general elections, it now has seats on 10 councils and five more councillors than 2009. It saw its share of the vote as high as 11% in Norfolk. Unlike UKIP, it already has an MP in Caroline Lucas for Brighton and Hove.

As we said in our vote Green article on the day of the election, tactical voting in the right areas means that they may be one of the parties who hold the balance of power in an increasingly likely hung parliament in 2015. That can only be a good thing, if the Green party can move our politicians more in line with public opinion over climate change and renewable energy.

Lending its endorsement to, and/or not standing against, individual candidates from other parties with good environmental record would be a mature and sensible strategy. Otherwise it risks splitting the vote of enlightened thinkers and letting in unreconstructed climate sceptics.

We wish we did not need the Green Party, but we desperately do.

Wind can be a winning argument with voters