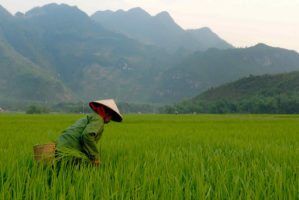 Sixteen months after having been granted site exclusivity from the provincial authorities, the Singapore-based renewable energy specialist, along with its Vietnamese partner TSV, have been awarded an Investment Certificate for 40 MW, opening the process to sign a long term lease, as well as Power Purchase Agreement with EVN, the national power utility.

The site of 933 hectares along the Highway One has seen a 100 metre meteorological mast erected by The Blue Circle in May last year to measure wind velocity and has a potential for a total capacity installed of 70 to 100 MW.

The Investment Certificate awarded to the company confirms the site inclusion in the Energy Development Masterplan of the Ninh Thuan province, as well as grid capacity availability for the project.

“This approval for 40 MW is only the first phase of the total project. With the grid connection on site, as well as very good wind speeds, the Dam Nai project has all the attributes to succeed even in a low Feed-In-Tariff environment,” said Olivier Duguet, Chief Executive Officer of The Blue Circle, in announcing that the Investment Certificate had been granted.

It is a great achievement and recognition of the professional development work which has been done by our team in Vietnam during the last three years.

“It is a great achievement and recognition of the professional development work which has been done by our team in Vietnam during the last three years”, he added.

The next steps for the project will be undertaking engineering studies along with the remaining permitting and financing. Construction is scheduled to start in 2017 for the first phase, to be followed by other phases in the subsequent years. Total potential investment for the first phase is expected to reach US$ 60 million.

“With less than 120 MW of wind power installed in the country so far, the Dam Nai project will position The Blue Circle as one of Vietnam’s wind energy pioneers, able to significantly contribute to the ambitious target set by the government. We intend to fully participate in the wind power expansion in Vietnam going forward and make wind energy become a reality in a country with big potential,” explained Gilles Beau, Chief Development Officer for The Blue Circle.

In accordance with the Paris Climate Conference signature, the Vietnam Prime Minister has set a new target of 4,000 MW for wind power capacity by 2025 which positions the country as potentially the largest market for wind power in Southeast Asia.