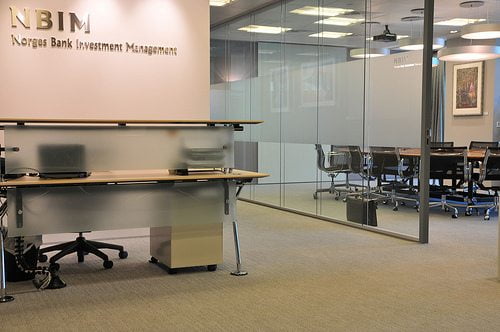 The ethics council of the Government Pension Fund of Norway (GPF) – the world’s largest sovereign wealth fund – should integrate into Norges Bank Investment Management (NBIM), according to a new report by a government commission.

The $800 billion fund, which is currently managed by NBIM but is owned by the Norwegian state, owns around 1.25% of the world’s stocks. The report suggested that the reform could improve efficiency and speed-up the decision making process.

Doerum said, “The more independent the council on ethics is, the better. In other words, it should not be made into a section of the Norwegian central bank.

“If anything, a less independent ethics council could lead to more conservatism – i.e. fewer exclusions.”

The Strategy Council also found “a serious gap in the knowledge exists” about long-term environmental and social trends and the impact it has on portfolio value in the long term. As a result, it recommended that the fund should encourage research in this area.

The report suggested that the fund become more open about its objectives, principles and polices. Doing so would encourage public trust and create dialogue and involvement that could lead to continuous learning and improvement.

Norwegian minister of finance Siv Jensen said, “I note that it is the Strategy Council’s view that gathering all the tools/instruments in one place and considering exclusions as an integral part of these ownership strategies will make the Fund more influential and improve the overall efficiency of our responsible investment efforts.

“We will have a thorough and open process to follow up the report from the Strategy Council.”

Only last week, the GPF came under pressure to divest from coal. It’s estimated that the fund has around 10-15% of its portfolio invested in the oil and gas industry, amounting to much as $114 billion.

The fund has also recently said it is considering boosting sustainable investments.