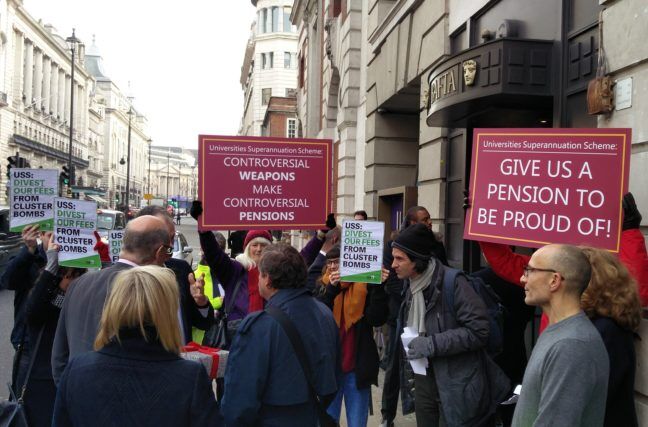 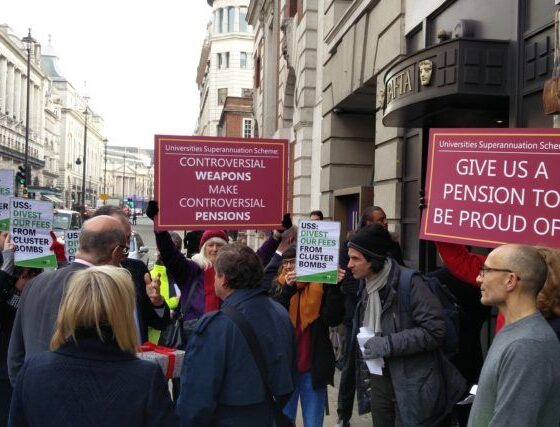 The petition is coordinated by Ethics for USS with support from ShareAction and the NUS. It calls on USS to phase out investments in companies involved with weapons banned under the Controversial Weapons Convention, as part of a request for a wider ethical policy which would be informed by a member survey and an annual forum event open to members of the scheme.

Professor Tim Valentine, a leading member of Ethics for USS, says “USS needs to understand that controversial weapons make controversial pensions. Two years ago scheme members called on USS to adopt an ethical investment policy based on members’ views. Yet in 2016 USS still invests our money in cluster bombs and other controversial weapons. Today we are renewing our call. The law allows USS to take our views into account. It is time to give us a pension to be proud of.”

Professor Valentine spoke with the scheme’s chief executive Bill Galvin and chair of trustees Professor Sir David Eastwood, who agreed to meet with scheme members to discuss the issues raised in the petition in early 2017.

USS provides pensions for over 300,000 academics and academic-related staff in the higher education sector. It is the UK’s largest occupational pension scheme, with almost £50bn in assets under management.

Trust-based pension schemes such as USS are legally bound to act in the best interests of their members. Guidance from the Law Commission states that trustees can take ethical factors into account if they have reason to believe scheme members would share a concern about these factors and that there would be no risk of significant financial detriment to the fund.

Robbie Young, NUS Vice-President (Society and Citizenship) said “the tuition fees students pay make up a significant proportion of the amount paid into this scheme, for example to lecturers’ pensions. The fact that our fees are funding companies that manufacture controversial weapons is completely unacceptable. Universities are meant for the public good and as an increasing number commit to ethical investment it is time for USS to reflect this trend.”

Responsible investment charity ShareAction, who supported USS members with the petition, is encouraging increased member engagement across the pension’s landscape. CEO Catherine Howarth says “like members of many schemes in the UK, USS members care deeply about where their retirement fund invests. We hope the trustees will do what they can, within the law, to engage with those deeply held views.”