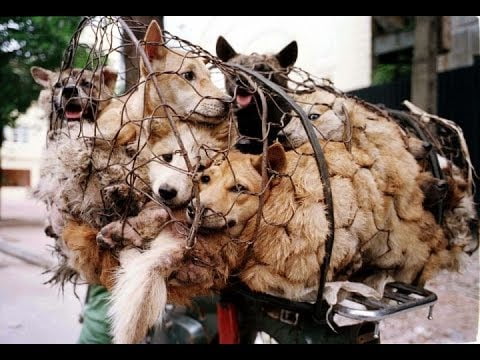 In one of the strongest showings ever within China against the dog and cat meat trade, more than 8 million Chinese citizens have voted online in support of a legislative proposal to ban the grisly industry. That is currently the highest number of votes for any proposal open to the public via the Chinese government’s official website.

Although this year’s annual legislative session has ended, Humane Society International welcomes what is a defining moment in the fight against the barbaric slaughter of dogs and cats, and will work with partners to assure it’s on next year’s agenda.

Submitted by National People’s Congress Deputy Zheng Xiaohe, the proposal comes ahead of China’s Yulin dog meat festival that takes place on and around June 21. The event, which receives global media coverage every year, is condemned both inside China and around the world for the inhumane killing and eating of an estimated 10,000 dogs and countless cats.

Peter Li, HSI’s China policy specialist, said: “It is very encouraging that a ban on China’s dog and cat meat trade has been proposed and that it has received such significant public support from inside China itself. The National People’s Congress can no longer ignore the wishes of so many millions of its citizens to end the cruel and largely illegal dog meat trade – and in particular shut down the dog meat festival in Yulin. While it’s off the table for this year, HSI, with the strength of its Chinese activist partners, will make sure the proposal is on the agenda in 2017. In the meantime, we continue our fight against such massive cruelty.”

HSI campaigns globally to end the dog meat trade that claims the lives of up to 10 million dogs annually in China, and around 30 million across Asia – including in South Korea, Thailand and the Philippines. Together with its Chinese partner network, HSI has been in Yulin during the festival period for the past few years, documenting the scene and working to end the slaughter.

Last year, HSI witnessed first-hand thousands of dogs packed onto trucks entering the town and then beaten with metal poles before being killed during early morning hours in illegal slaughterhouses without license to operate. The majority of the animals are stolen pets grabbed from the streets, still wearing their collars as they are stuffed into cages, loaded on to trucks and driven for days to reach  Yulin.

The Yulin festival has no cultural significance; it was concocted by dog meat traders as recently as 2010 as a way to boost their flagging business. Although dog meat can be found in China today, it is not widely eaten, nor is it part of mainstream culinary practice.

Editor’s note: Concerned global citizens can show their support for ending the dog meat trade in China by signing HSI’s global petition athsi.org/helpstopyulin that will be presented to the Chinese authorities in early June.