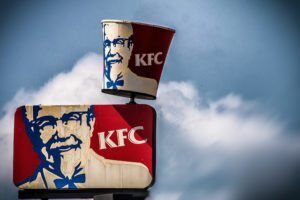 According to World Animal Protection very few people are aware that the mass production of meat chickens is one of the biggest causes of animal suffering in the world and have therefore launched a campaign urging KFC to improve chicken conditions.

Consumers are being kept in the dark, say the charity, as they release a new global poll revealing just how little we know about the chicken on our plate.

The poll – of 12,000 people worldwide – shows that although people are concerned about what they eat, very few know where that chicken meat has come from.

What the poll tells us about UK’s consumer views:

· Of those who eat chicken, four out of five (79%) said they would not buy chicken from a fast-food chain if they knew it had suffered serious health problems as a result of living in a cramped industrial farm

· Four out of five (78%) never ask where their chicken comes from at fast-food outlets.

“This conveyer belt of rapidly grown chickens comes at a price. Behind the world’s favourite meat is an unacceptable cost of suffering that is increasing as the global demand for chicken grows.”

Behind the world’s favourite meat is an unacceptable cost of suffering that is increasing as the global demand for chicken grows.

On average, sixty billion meat chickens are raised for global consumption each year. Nearly 2,000 chickens are slaughtered every second on average. An estimated two thirds of these animals (40 billion) live in bleak, overcrowded sheds or cages with little or no natural light or fresh air, unable to perform many natural behaviours, such as scratching and pecking around on the ground, perching and dustbathing.

“The welfare standards for KFC chicken meat sold in the UK meets the minimum requirements of EU and UK welfare legislation, but we want to see higher welfare chicken used in all of KFC’s supply chains around the world, including in the UK.”

Many chickens will suffer painful lameness, and overworked hearts and lungs from the speed at which they are grown, and wounds like skin sores and burns from spending too long in their own waste. The chickens’ lives are miserable but they are also shockingly short – many are slaughtered while still babies, at as young as five weeks old.

World Animal Protection is now challenging one of the largest fast-food retailers of chicken, KFC, to improve the welfare standards of the chickens they serve up in their restaurants. The charity is calling for slower-growing birds with more space, enrichment and natural light to allow for a better quality of life.

KFC’s animal welfare policy, developed by their parent company Yum! Brands which states their goal “is to work only with suppliers that demonstrate and maintain compliance with animal welfare practices.” However, they are currently ranked in the second lowest position by Business Benchmark on Farm Animal Welfare (BBFAW), the global measure of company performance on animal welfare.

Steve McIvor continues: “We need to expose the woefully poor conditions that many factory-grown chickens are living in. They are suffering in secret, behind closed doors and away from public view. KFC has a huge stake in the market with more than18,000 outlets in 115 countries, we’d like to see them use their global influence to show they care about the welfare of chickens.”

The public is being urged to sign-up to make a Change for Chickens.