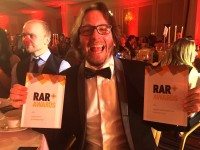 Be Inspired Films is delighted to have won two awards at last night’s Recommended Agencies Register (RAR) Awards in recognition of its work in the creative communications industry. The agency is a specialist in CSR and sustainability communications, working with responsible businesses to help them tell their unique stories through film.

Be Inspired Films picked up trophies for Best Agency for Effectiveness (Under 40 Staff) and for TV/Radio/Video Agency of the Year (Under 40 Staff), having achieved a very impressive 92 per cent customer satisfaction rating. In total, the Birmingham-based creative agency was shortlisted in six categories in the RAR Awards, which cover the entire UK creative communications sector.

Ravinol Chambers, Founder of Be Inspired Films and VideoKnowHow Academy, said: “I am over the moon to win these two awards, it really is a testament to the hard work, dedication and commitment of our team and the support of our clients.

“I believe there is a new wave of businesses and organisations that want to see a world where they can be successful and help solve the big problems we face as a society and as a planet, at the same time. That’s really exciting! That’s where we want to be, helping those organisations make that happen.”

Unlike other agency awards, the winners of the RAR Awards are decided by genuine customer satisfaction levels on aspects such as creativity, effectiveness, customer service and strategic thinking. Be Inspired Films was rated by almost double the number of clients compared to 2015, when it was shortlisted for the TV/Video/Audio Production (Under 40 Staff) and Sponsorship (Under 40 Staff) awards.

Ravinol Chambers added: “Awards like this are the culmination of many years of commitment to our work and to the driving force behind what we do, which is to create a better world for ourselves and for our children through storytelling that empowers us as a society.”

Be Inspired Films help individuals and organisations working as a force for good across business and society to bring their stories to life using video and animation.