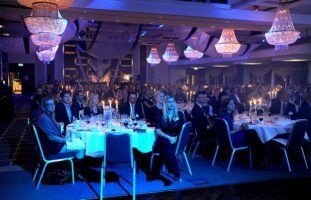 The shortlist of nominees for the 2016 edition of the prestigious Low Carbon Champions Awards has been announced by the Low Carbon Vehicle Partnership (LowCVP). The Champions Awards celebrate innovation and best practice in the UK’s ambition to cut carbon emissions from the road transport sector.

The Awards are in their sixth year and will, for the third time, following the sell-out and successes of 2014 and 2015, be presented at the LCV2016 Networking and Awards Dinner at the DoubleTree by Hilton Hotel, Milton Keynes. The event is held in collaboration with Cenex, and this year will take place on the evening of Wednesday 14 September 2016 – the first of two days of Cenex’s Low Carbon Vehicle (LCV) 2016 event.

The Awards celebrate outstanding and innovative practice in the UK in accelerating the shift to lower carbon vehicles and fuels and reducing road transport emissions. The LowCVP Low Carbon Champions Awards are one of a select few sustainable development awards schemes to have received accreditation by the Royal Society of the Arts (RSA), which enables category winners to go forward to the European Business Awards for the Environment (EBAE).

The ‘Grand Prix’ sponsor of the 2016 Low Carbon Champions Awards is, once again, Millbrook, host of the LCV2016 event.

Commenting on this year’s Awards shortlist, the LowCVP Managing Director Andy Eastlake said: “It’s been another year of significant progress in decarbonizing UK road transport from the point of view of both technology and uptake. In many areas of transport technology has been developing at an extraordinary pace, and vehicle users are having to work hard just to keep up. The LowCVP is at the centre of this exciting industry and we look forward to celebrating the UK’s continued leadership in this vital area.”

I commend all those organisations that have made this year’s Champions Awards shortlist and look forward to a great night on 14 September, when we’ll announce the winners.

The LowCVP Champions Awards were established in 2010, and this year’s event is again set to be the leading low carbon vehicle industry social and networking occasion of the year. Cenex-LCV2016, which is being held at Millbrook Proving Ground on 14-15 September, is the UK’s Premier Low Carbon Vehicle Event, attracting UK and international visitors and combining a technology exhibition with broad B2B focus, a Ride & Drive in a test-track environment, networking activities and an extensive seminar programme. For more information, visit http://www.cenex-lcv.co.uk/2016