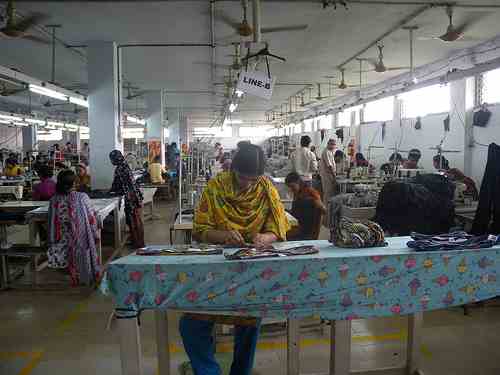 Garment factory workers in Bangladesh will have their salaries increased by 77% after business owners were persuaded by the government to improve working conditions for employees.

The industry and government have agreed that workers will now be paid a minimum of 5,300 takas (£43) a month, despite workers representatives calling for an 8,114 takas (£64) minimum salary. Before the issue was raised, the standard wage could be as little as £23 a month.

Business owners initially opposed the wage increase, but agreed to it after a meeting with the country’s prime minister Sheikh Hasina. The move may have been done for political reasons, according to the Guardian, as the PM’s party was losing consensus.

Mohammad Atiqul Islam, president of the Bangladesh Garment Manufacturers’ and Exporters’ Association said, “We have agreed to the new wages after the prime minister assured us she would look into our problems.”

Debate over wage increases for factory workers has led to street protests in the past few months. These followed the Rana Plaza factory collapse in April, where more than 1,000 workers died and the many western fashion brands came under scrutiny because of the poor working conditions in which employees were producing clothes.

The garment sector is a crucial pillar of Bangladesh’s economy, employing 4 million people – mostly women – and is the world’s second-largest apparel exporter of western brands after China. Around 60% of export is made towards European firms.

A BBC Panorama investigation revealed in September that workers producing goods for Lidl, H&M and Gap were working from 7am to 2:30am. Meanwhile, other brands have been strongly criticised for refusing to pay compensation to the victims of the Rana Plaza disaster.

However, more than 100 firms have signed the Bangladesh Safety Accord, an agreement between companies, factories, NGOs and trade unions, to make working places in Bangladesh safer.