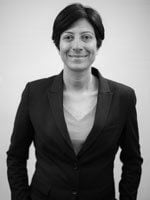 Katie became Chief Executive of the ERS in 2010. A campaigner and barrister with a background in human rights law and immigration, she served as a Commissioner on the Independent Asylum Commission from 2006-2008, where she helped to conduct the biggest ever independent review of the UK asylum system leading to the government’s commitment to get rid of the detention of children in immigration centres.

She has worked as a lobbyist and campaigner for several third sector organisations including Age UK and Citizens Advice and spent five years as Director of the British Institute of Human Rights. Katie has delivered lectures, seminars and courses on campaigns and public affairs the UK for a range of charities, public bodies and lawyers. Her first book Beyond the Courtroom: a lawyer’s guide to campaigning was published by Legal Action Group in 2005.

Katie is also on the Board of Fair Vote, a US organisation campaigning for electoral reform. She speaks to Blue & Green.

In 140 characters or less what is the mission of the Electoral Reform Society?

The ERS campaigns for a better democracy, where every vote counts. We push for fairer votes and real reforms to forge a 21st century democracy.

The ERS was founded in 1884 as the Proportional Representation Society. Proportional representation (PR) seems to be a distant development in the UK, especially following the 2011 AV referendum. Do you think we’ll see PR ever adopted for Westminster elections?

Absolutely – it is becoming clearer that Britain’s voting system is completely bust in the multi-party reality that is here to stay. Last May we saw five major parties come together to call for proportional representation, alongside petitions representing half a million people.

And now, Labour – alongside the trade unions following a TUC vote last year – are starting to talk about electoral reform, which is a hugely welcome development. An open debate about how First Past the Post currently works among people from all parties and none is a crucial first step towards reform. With Wales, Scotland, Northern Ireland, the London Assembly and the European elections all using proportional systems, Westminster is looking increasingly out of date and isolated. It is only a matter of time – and hard work – before PR is used in Westminster too.

You recently ran two Citizen’s Assemblies in Southampton and Sheffield. What were the key take outs from those assemblies? And any plans to do more?

The Citizens’ Assemblies were a joint initiative between several universities and the Electoral Reform Society, supported by the Economic and Social Research Council (ESRC).

What we saw with the gatherings of local residents – broadly representative of their area – was a real appetite for more engagement in the devolution process. When people learnt about the devolution plans, they wanted to be involved and have their say. People want strong devolution for their areas, but they also want a say in what that devolution looks like – which powers they should have, whether they want an elected mayor or local assembly, and what areas they should cover. There is a danger that without public involvement, these devolution deals simply aren’t sustainable. Politicians need to let the public in.

Voter registration and turnout is low and/or falling across the developed world. How do we arrest and reverse that trend?

There are many things that can be done to improve turnout and registration. We need to be looking at innovative ways to boost engagement – from weekend voting, to allowing citizens to vote wherever they are, to extending citizenship education. Research shows that countries with proportional voting systems typically have higher turnouts, as people feel their votes actually count.

We also need a registration revolution in this country. Many countries have automatic registration, and while it’s a welcome development that citizens can now register online, we need to be looking at ways to increase the opportunities to register – from getting drivers’ licenses to passports and benefits.

We have low turnout, a disproportional electoral system, corporate/media influence, an unelected second chamber, messy and unequal devolution and massive economic, social and environmental problems to address. How are we going to create a “representative democracy fit for the 21st century” What key reforms would make our democracy more representative and more sustainable?

Firstly, we need a fair voting system for Westminster and local elections in England and Wales. The Single Transferable Vote used for Scottish local elections allows you to rank candidates in preference order, and produces far more representative results than First Past the Post (Ed. We used this system for our recent Marbles awards). The number of voters whose first preference choice was elected went from 52% in 2003 under FPTP to 77% in 2012 under STV, while the number of candidates standing for local wards doubled – voter choice has massively improved and voter satisfaction has improved massively too.

We also need to bring the House of Lords into the 21st century. It is completely broken – packed full of party appointees instead of people chosen by the public. Just 10% of the public think that the House of Lords should remain a fully-unelected chamber, while the vast majority want major reform. It’s understandable why – in the last Parliamentary session alone, over £100,000 was claimed by Peers who did not vote at all, while it is increasingly stuffed with former party staff and cronies.

Alongside these two essential changes, we can revive our democracy with a cleaner system of party funding, votes at 16, and a UK-wide citizen-led constitutional convention.

Do you think direct democracy, e.g. referendums, will play a greater role as elected representative pass big decisions back to the electorate?

The public certainly need more of a say over how decisions are made. Referendums are often a blunt instrument – we need a deepening of democracy across the board, with active participation to influence decisions open to all through greater use of citizens’ assemblies and other democratic spaces. , public debates

What’s the immediate priority for the ERS this year?

We’ll also be campaigning for a well-run EU referendum, one that is transparent, open and positive. This should be a spirited debate about Britain’s democratic future, not a slanging match, so it’s essential that the public get a decent debate.

On top of this, we’re stepping up our calls to make devolution truly democratic, and to have an upper chamber fit for the 21st century.

How can people get involved and support the work of the ERS?

If you care about building a better democracy in the UK, you can join the ERS from just £12 a year. Becoming a member means you can support the work of the ERS, get involved in the organisation, and keep in touch with the campaign for reform. There are also petitions to sign, and there is plenty on our website and social media to share. Every person spreading the word is important to the push for a fairer democracy.