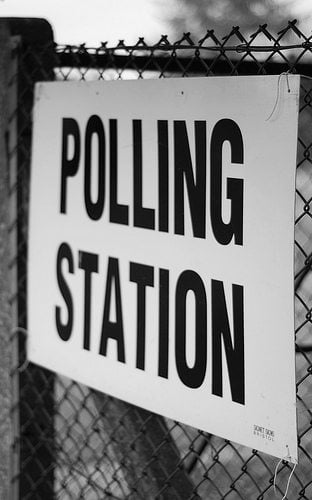 Periodically voters have the opportunity to nudge the tiller of their country in a different direction. 1910 saw the election of a government to pass a radical People’s Budget against the will of the Lords. In 1945 the electorate voted for the creation of the NHS, Welfare State and a massive house building programme. 1979, saw the country shift towards neoliberal economics. 2015 could be another turning point for the UK.

We’ll make a prediction. Every election from now on will deliver a hung parliament. None of the major parties can, or will ever again, command the support of enough of the electorate to secure a majority. ‘None of the above’ will too often be the winner. Minor parties will have more influence than they have ever had. They should use it wisely.

The United Kingdom is not at ease with itself.

The three ‘main’ parties memberships have been reduced to a shadow of their former selves (~280,000 between them), while the SNP, UKIP and Greens have all surged (~200,000). The current electoral system cannot handle a genuine multi-party democracy, thus delivering unsatisfactory and undemocratic results.

Our local, national and international environment is being degraded, leaving a terrible legacy for future generations. This is on top of a growing pile of public debt, incurred by older generations. We are over-centralised in Westminster, London, Edinburgh and Cardiff.

We have too few homes for our people. We have too few schools for the generation entering education. University funding is a joke. Our hospitals and surgeries cannot cope with ever increasing demand. Our infrastructure, especially water, energy and rail, is insufficient for the demands placed upon it. Our financial system is utterly unreformed and remains out of control, meaning another crash is inevitable and will be even more ruinous. Our borders are porous so we have no idea who is entering or leaving the country.

And we don’t have a free media that holds the powerful to account because they are part of the same establishment and funded by the establishment. Editors, leading journalists and unpaid interns went to the same schools and universities and share the same philosophy. If there hasn’t been a state-educated editor at, of all places, the ‘left-wing’ Guardian since 1956, what do national newspaper editors really know about the lives of ordinary working people.

So we do face a stark choice at this election. ‘More of the same’ failure or a bold new direction for the United Kingdom, its four nations and diverse regions. The same is clearly failing a resilience test.

We need to protect the environment and lead the world on climate action. We need to devolve decisions making to the most local practical level, giving power back to communities.

We need to build hundreds of thousands of energy efficient homes every year, many of them for social housing occupants and first time buyers. We need to reform the private rental market. We need many more schools and better funded tertiary education with apprenticeships and university places that lead to well-paid, secure jobs. We need better funded, integrated, locally-run health and social services. We need a massive shift to local, clean energy and energy efficiency. We need to look at the utilities and rail ownership again. We need banking to be reformed root and branch and made to work for society. We need to know who is entering and leaving our country, especially in a period of ‘lone wolf’ terrorist threats.

We need a functional democracy, without unelected members, and parliamentarians that are more representative of the people they serve, with life experiences outside politics or the highest-paid professions.

We need a genuinely free, domestically-owned, press to hold all of the above to account.

All of this is possible if we vote for it. Capitalism (profit), socialism (people) and environmentalism (planet) can coexist quite easily, without one trampling on the needs of the other two. Capitalism failed utterly in 2008, but bizarrely socialism, in the form of public spending, was blamed. Environmentalism doesn’t get a look in on most occasions.

It’s time to make the UK sustainable, by creating a balance between all three, to make the United Kingdom a group of countries, cities and regions at ease with itself and more resilient against future shocks.