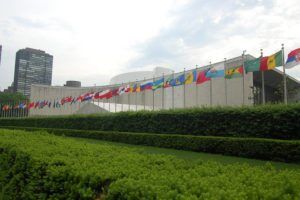 Global Development Goals One Year On

As of next week (25th September) it will be one year since 193 world leaders adopted the Sustainable Development Goals at the UN General Assembly. Following which these Global Goals reached almost half of the world’s population, around 3 billion people.

This year in order to keep up momentum and ensure all 17 Goals are achieved, the UN and partners from around the world are launching #GlobalGoals Week – an annual week of action, awareness and accountability for Sustainable Development. At the centre of this week will be ‘SDG Year 1’, a special session at the UNGA Opening which will call on all world leaders to implement the Sustainable Development Goals by 2030 and mark progress in 2016. It will include films, produced by writer, film-maker and SDG Advocate Richard Curtis, and feature SDG Advocates Forest Whitaker, Andrea Bocelli, Dr. Alaa Murabit, the President of the General Assembly Peter Thomson and the UN Secretary General Ban Ki-Moon.

Throughout the week, UNDP, UN Foundation, SDG Action Campaign and Project Everyone, the founding partners of #GlobalGoals Week, will work with events and organisations such as the Social Good Summit, Global Citizen Festival, the office of the Special Adviser for the 2030 Agenda for Sustainable Development, the World’s Largest Lesson and UNICEF, Leave No-One Behind partnership, Global Compact, Every Women Every Child, GSMA, the UN Department of Public Information and many more to promote action, accountability and awareness of the Goals. So this September starts the countdown for the next 14 years to ensure no one is left behind.

As part of #GlobalGoals Week and in the year Girl Power went Global, the messages from people around the world inspired by the film #WhatIReallyReallyWant, will be brought to NYC as world leaders gather. Issues like quality education, an end to violence, an end to child marriage and equal pay for equal work need to be top of every governments’ agenda in order to give the Goals the best possible start. With 110 million views, 40 million impressions on Twitter and global media coverage, produced by MJ Delaney and supported by original Spice Girl, Victoria Beckham and Mel C, the film inspired an overwhelming response on social media with people from all over the world sharing images of what they really want for girls and women. These messages will be brought to New York on a Global Girls bus with performers from the video and influential women at key events and moments throughout the week.

1. SDG Year 1 at the UNGA Opening Session – A unique SDG accountability moment including films, produced by writer, film-maker and SDG Advocate Richard Curtis, and featuring SDG Advocates Forest Whitaker, Andrea Bocelli and Dr. Alaa Murabit, the President of the General Assembly Peter Thomson and the UN Secretary General Ban Ki-Moon. This moment will call on all world leaders at the UN General Assembly to implement the Sustainable Development Goals by 2030 and mark progress in 2016.

2. The Young Leaders Initiative – launched by the Office of the UN Secretary General’s Envoy on Youth, is announcing 17 Young Leaders (19–30) and champions for the SDGs recognized for their leadership and contribution to a more sustainable world, and representing every region in the world.

5. Global Goals Awards Dinner – in partnership with the SDG Advocates, Unilever and UNICEF focusing on Global Girls and giving awards to those who have helped make progress towards Girl Goals. This will be the first annual dinner to mark accountability for the Sustainable Development Goals, and will call on all sectors – from the public, to civil society, government, media and business – to do more, and work together to achieve their implementation over the next 14 years.

6. Solutions Summit – a summit highlighting projects and creative solutions advancing the achievements of the Global Goals

7. Global Citizen Festival – The fifth Global Citizen Festival will focus on the achievement of the SDGs, bringing together musicians including Rihanna, Coldplay and Ellie Goulding, celebrities and world leaders in an effort to enact major policy commitments toward the issues of girls’ and women’s equality, education, health, water and sanitation, environment, finance and innovation, and food and hunger.

8. The World’s Largest Lesson – in partnership with UNICEF has reached 160 countries since launch, and in 2016 is launching in India with Bollywood Actress Sonam Kapoor and youth organisations in 120 countries sending volunteers to teach lessons to younger children.

9. The Global Goals Mobile Campaign 2016 – includes an official SDG Action app produced by the GSMA, Project Everyone and DPI, participation of 17 mobile operator groups with 2 billion customers being asked to support the campaign, and 900 million people receiving a Global Goals text message. A live Mobile Show featuring the best of Global Goals week and in partnership with Global Citizen, will be made free to view on mobile, and a fun interactive feature will enable millions to text Mr. Bean and world leaders about what they love most in their world.

10. The Global Girls Bus – As leaders attend a Special Session inside the UN Chamber on the SDGs, a Global Girls bus will begin a loud tour of New York, ensuring the messages received from women and girls around the world this year from the #WhatIReallyReallyWant campaign are heard loud and clear. The bus will bring together performers from the #WhatIReallyReallyWant video with leading women’s rights activists and public figures to shout about the progress that still needs to be made for women and girls.

The UN has an ambitious agenda to end poverty, fix climate change, and address inequalities over 15 years.

“The UN has an ambitious agenda to end poverty, fix climate change, and address inequalities over 15 years. Now we need everyone to help make this a reality. Everyone needs to know about the Goals, and every September when world leaders gather for the opening of the UN General Assembly, we must emphasize the importance of delivery on the promises of the Sustainable Development Goals.”

“Our collective commitment to the 17 Global Goals is our most important defense in ensuring that the benefits of our modernizing world are shared among all nations and people and not just by the privileged few. These goals are intended to serve the interest of every woman, man, and child on our planet. And that means that achieving these goals is up to all of us. This has to be an international movement—a coming together of people and a rallying around a common cause on a scale. I believe we have the tools and the passion to make the Global Goals a reality.”

David Nabarro, Special Adviser to the Secretary General for the 2030 Agenda for Sustainable Development and Climate Change said:

“In this first year anniversary – “SDG Year 1” – more than 50 governments, and also numerous businesses, scientists and civil society organizations have stepped up their efforts to make the SDGs a central framework for their policies and actions, and have increased their focus and investment on data collection and analysis to guide decisions and leave no on behind. The first anniversary of the adoption of the SDGs is an opportunity to celebrate all achievements made, to do more to make SDGs a reality and most importantly to thank the governements, businesses, civil society groups and young people around the world for all their efforts.”

“The Global Goals are an enormous opportunity for positive and creative change. We have to continue to raise everyone’s awareness of them and especially excite the curiosity of children and young people. Of course we need the support of world leaders but global change also has to come from the ground up. The World’s Largest Lesson and The Global Goals campaign are taking a creative approach to inspiring this kind of action and I’m proud and excited to continue my work with them this year.”

“Every year counts in trying to achieve the high ambitions of the new Goals. I am encouraged that a series of traditions is starting – Awards for people working for the Goals, the World’s Largest Lesson, the Social Good Summit, the Global Citizen Festival and mobile show, focusing on the Goals and most important, a special session at the UN itself – all of which which adds to the pressure on all of us to work towards fulfilling the SDGs.”

“This week is not just about the numbers. It’s about what the numbers can do when they come together around real solutions for real people. What kicks off with the Global Goals week announcement at the Social Good Summit will include important moments where the UN and partners are coming together around tangible, scalable solutions for progress. The Solutions Summit on September 21st is a good example of how much energy and creativity is coming around these goals. It’s a smart approach that puts numbers to work and helps turn words into action.”