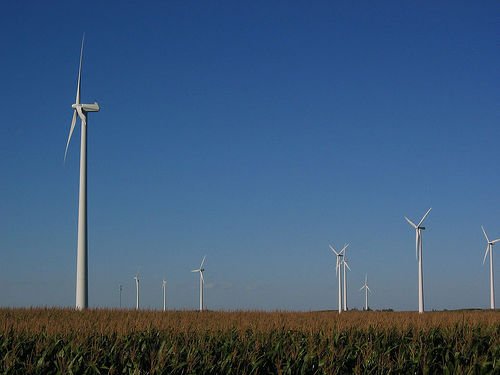 The internet giant Google has revealed its total investment into renewable energy nears $1 billion, after announcing its latest development: a $75m wind farm in Iowa.

The 50 megawatt (MW) project, which will provide power to 15,000 homes in the state, is being led by clean energy firm RPM Access, with the wind turbines manufactured by Nordex USA.

It announced last November that it was scrapping its renewable energy research and development department in favour of straight up investment into clean energy technologies, and says that this latest project in Iowa, on top of previous ventures into renewables, brings its total investment in the sector to $990 billion.

“Back in 2010, we entered into a long-term contract to purchase wind energy from NextEra Energy Resources’ Story County II wind farm”, a Google blog post read.

“This time, we’re investing directly into a wind project, which has been contracted to sell all of the energy to the Central Iowa Power Cooperative, an Iowa-based utility that will deliver the energy to local consumers.

“We’re happy to help make more renewable energy available to Iowans and to support the growing wind energy industry in the state.”

The model being implemented by Google means that local people in Iowa will directly benefit from its wind power investment. In the UK, we’ve seen that placing the community at the heart of a renewables project – such as the wind and solar developments at Westmill – really does work, and allows consumers to feel engaged with their energy.

This strategy is key to empowering renewables and decarbonising the energy mix.

For an organisation such as Google, which turns over nearly $38 billion a year, putting $75m towards a renewables development is relatively small change – but the sheer scale of projects being deployed by it is admirable.

As well as the wind farm in Iowa, last year it pledged $94m to a portfolio of four Californian solar projects, $157m for a wind development in the Mojave Desert and $100m into a wind farm in Oregon.

Google heads Greenpeace IT ranking but Apple and Facebook omitted