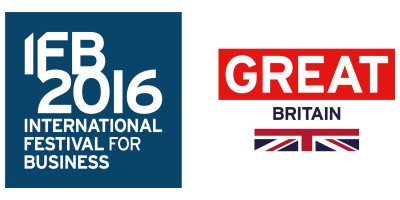 A group of leading innovators, investors and leaders from world-renowned brands have today given their support to the International Festival for Business 2016 (IFB2016).

This new cohort of Ambassadors for IFB2016, the largest business festival in the world, covers technology, venture capital investment and enterprise, reflecting Britain’s international appeal in these areas:

The latest group of Ambassadors comes from the forefront of the digital, creative, design, technology and venture capital sectors, highlighting Britain’s global standing in these industries and demonstrating the global growth opportunities that this offers British firms.

The Department for Culture, Media and Sport found that the creative industries, at a value of £84.1bn, now account for just over 5 per cent of the UK economy, with a growth rate of 8.9 per cent, almost twice that of the UK average. The Tech Nation 2016 report released by Tech City UK also highlights the UK’s digital industries are growing 32 per cent faster than the rest of the economy.

Backed by HM Government, IFB2016 is the world’s biggest business festival and global marketplace where deals are done. Commencing on 13th June and running for three weeks, it will bring together thousands of global businesses, providing a platform for companies to connect and conduct international commerce.

The new Ambassadors join a first cohort announced in November 2015, representing the energy and environment, and manufacturing industries and featuring some of the UK’s best-known entrepreneurs and investors:

The Ambassadors group represent the core three sectors that will be focused on at IFB2106; creative & digital, energy & environment, and manufacturing. The strength of these sectors has been reinforced this month through official recent figures.

Max Steinberg CBE, Chair of IFB2016, said: “The calibre of business leaders supporting the International Festival for Business 2016 is testament to the widely anticipated impact of what will undoubtedly be the greatest global business showcase of the year.

“Our Ambassadors have unrivaled business success records and will play a crucial role in championing the benefits of international commerce as well as ensuring the legacy and impact of the IFB2016.”

On being among the latest business figures to voice their support for IFB2016, Eileen Burbidge, Partner of Passion Capital, Chair of TechCity UK, HM Treasury’s special envoy on FinTech and Ambassador for IFB2016, said: “The UK’s digital industry is continuing to mature as investors are attracted to its diversity and standout sectors such as fintech. Now we need to broaden this success to feed the ecosystem and enable more cross-sector collaboration.”

Frank Meehan, Co-Founder of SmartUp and Ambassador for IFB2016, said: “The UK is an increasingly competitive destination for young talent and entrepreneurs. We need to capitalize on this reputation, and support these businesses to innovate and maintain the momentum. As we are already seeing in finance and education, the digital industry is going to truly transform our traditional sectors.”

HSBC and BT are the lead sponsors of IFB2016 – and the Festival’s commercial partners include ARUP, DLA Piper, DONG Energy, Heathrow, PwC, Siemens and Virgin Trains.