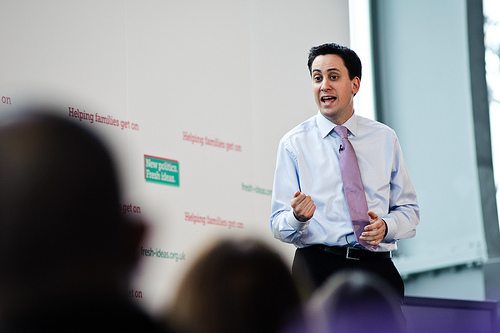 Labour leader Ed Miliband has said that the so-called “Wonga economy” is one of the worst aspects of the cost of living crisis, with payday lenders preying upon those struggling to make ends meet.

His comments came as payday lender bosses were quizzed by MPs, on questions about their excessive charges, advertising strategies and accusations that they harass customers who take out loans. Wonga boss Henry Rain said there was a “silent majority” of happy customers.

However, in a speech at Battersea power station on Tuesday, Miliband said, “Payday lenders don’t speak for the silent majority. They are responsible for a quiet crisis of thousands of families trapped in unpayable debt. The Wonga economy is one of the worst symbols of this cost of living crisis.”

Last month, the Labour leader also said that if elected, he would force payday lenders to “pay back to communities” by increasing their taxation.

He added that the funds raised, estimated to be around £20m, would be used to fund credit union rivals, which have been endorsed by leading figures such as the archbishop of Canterbury Justin Welby.

The comments come as part of Miliband’s wider pledge to tackle the cost of living crisis. Energy bills, frozen wages and zero-hour contracts are just a few of the issues that he says constitute the problem.

Last week, head of the new financial watchdog the Financial Services Consumer Panel (FSCP) Sue Lewis told Blue & Green Tomorrow that the payday lending industry has the scope to be a good product, but she warned that bad practices have to be stamped out.