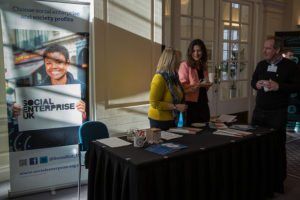 According to a survey released by Social Enterprise UK, football clubs and utility companies are named as the industries to be making an excessive or unfair profit at the expense of consumers.

The findings of the poll, which surveyed the British public, show that two-thirds (67%) of the British public think football clubs are profiteering at the expenses of consumers. They are followed closely by electricity, gas and water companies (61%), and television subscription providers such as Sky, Virgin, BT and Talk Talk (61%). Train companies are believed to be profiteering by 58% of people, followed by banks (53%).

The YouGov poll has been released ahead of Social Saturday which takes place later this week on 15th October. The day aims to inspire people to buy from British social enterprises – well-known names include The Big Issue, Jamie Oliver’s Fifteen restaurant chain, Divine Chocolate and Belu Water.

Free of shareholders, social enterprises are able to plough their profits back into the business to deliver on their social or environmental mission, which might be getting ex-offenders back into work or reducing food waste.

Britain is home to 70,000 social enterprises and to an increasing number of Social Enterprise Places. These towns, cities and villages, including Gateshead, Salford and Plymouth, are nurturing social enterprises to start-up and grow to tackle local issues and to help communities flourish.

The poll also reveals that awareness of social enterprise is rising amongst the British public. A majority (51%) are now aware of these alternative businesses, compared with 37% two years ago in 2014. In 2008, only 1 in 5 (20%) British adults were aware of social enterprise.

The polling reveals that while more people living in Scotland, the North and the Midlands than in other parts of the UK think that banks are profiteering at the expense of consumers (55%), more people in Wales than anywhere else think the same of businesses operating in childcare (30%).

The findings of this poll tell us that in some industries British consumers are really losing out and it’s a sign that capitalism has gone wrong.

“The public are getting a rough deal because some businesses have an insatiable appetite for profit.

“There are social enterprise alternatives in almost every industry that consumers can buy from. These businesses are free of the shackles of profit-hungry shareholders, which means that they’re free to put customers and communities first. One of the reasons that the UK’s social enterprise movement is growing is because people care about the ripple effect of their spending. Research shows that an increasing number of social enterprises are selling products and services to British consumers.”

On Saturday 15th October, social enterprises around the country are opening their doors and hosting events to motivate the British public to ‘buy social’. Local MPs are also visiting social enterprises in their constituencies. Visit www.socialsaturday.org.uk to find out what’s happening near you and to buy from social enterprises online.

Fan-owned AFC Wimbledon Football Club was founded by its supporters in 2002 as a direct reaction to the decision by an independent commission appointed by the Football Association to allow Wimbledon F.C. to relocate to Milton Keynes. The majority of Wimbledon F.C. supporters opposed the idea of moving the club more than 50 miles away from Wimbledon. Wimbledon F.C. physically moved in 2003 and then changed the name of the club to Milton Keynes Dons in 2004. In its short history, AFC Wimbledon has been extremely successful, being promoted six times in thirteen seasons, and going up from the ninth tier (Combined Counties Premier) to the third (League One).

Dwr Cymru Welsh Water is a not-for-profit water company which has no shareholders and operates solely for the benefit of its 1.3m customers. In June 2016 it announced a £32m windfall for its customers – a first for the UK utility industry. Previously customers have received a reduction in bills, but for the first time Welsh Water is returning the value through a series of investments identified as community priorities in research carried out by the company. This will include investing in on-site renewable energy schemes that will lower the carbon intensity of the business while helping to keep bills down in the future. The company will also increase help for customers who are struggling to pay their bills.

Energise Barnsley has been setup with Barnsley Metropolitan Borough Council to deliver community owned renewable energy and heating projects. It aims to alleviate fuel poverty and support vulnerable people living in the borough. So far more than 300 council owned homes have received free solar PV assets: 75% of the houses are bungalows in which elderly tenants live. All homes have a solar electricity reader which helps residents maximise their savings by indicating when the solar panels are generating and when to use the free electricity. Energise Barnsley is channelling all surplus profits from the generation of renewable electricity into a Community Fund to improve the lives of those living in the community.

Award-winning Plymouth Energy Community aims to give people in Plymouth the power to change how they buy, use and generate energy. Run by the community for the community, this social enterprise reducing energy bills for local people, improves energy efficiency and generates a green energy supply in the city. On Social Saturday the team will be offering guided tours around its Community Solar Farm in Ernesettle to show people how the solar farm works and tell visitors about their work.

Triodos Bank connects individual savers and investors who believe in a fairer, more sustainable world with the social enterprises, charities and businesses that are making it a reality. The bank only lends money to organisations that make a positive difference to people and the planet.