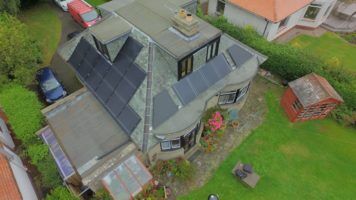 Solar Kingdom Ltd, a small Edinburgh Renewables business has been nominated for the second year in a row in the prestigious Solar Power Portal Awards taking place next week.

Last year they won the Best Integrated Renewables System category, and this year are nominated for the Best Residential PV Project. They were also recently shortlisted in the European wide Beauty of Solar Award run by Solar Power Europe for a commercial project undertaken in Fife.

The shortlisted project has been titled ‘The Unpromising House’ as at first examination it would not appear to have much potential for the use of solar technologies. Its age and construction meant building performance was well below that required to qualify for Feed In Tariff support. Through incremental improvements, its energy efficiency has been increased to meet the necessary criteria. As a result the house now has the additional benefit of lower running costs for space heating.

Principal design criteria was for a ‘zero net energy’ system, one that over a year produces as much electricity as the property uses (around 4000kWh), and secondly to fit market leading equipment. Available south facing roof space was limited, so the majority of the solar panels were applied on the east and west roofs, not the most widely adopted solution, but through use of state of the art equipment it generates the required amount of electricity with a flatter, smoother production curve.

The solar PV panels are integrated into the roof, and operate with cutting edge electronic equipment that maximises output. This is coupled to what is thought to be the first Tesla Powerwall battery storage system installed in Scotland.

The installation shows what the future will be for households that have solar PV or are able to fit battery storage. In conjunction with the Tesla Powerwall battery the system is expected to provide around 65% of the property’s electricity needs every year.

The house has an existing solar thermal water heating system whose panels were removed to make space for the solar PV, which will continue to provide 55% of the property’s annual hot water requirement.

In order to retain the system, Scottish based AES Solar manufactured two custom built panels that fit snugly in to the roof hips. This is a new service from AES, who are currently the only UK company with such a facility. AES CEO George Goudsmit explained, “Working with Solar Kingdom to complement what is a state of the art solar PV system, enabled my team to demonstrate their unique capabilities to meet such bespoke requirements”.

For Peter Randall, owner of Solar Kingdom this has been a further expression of his passion for, and commitment to the solar industry. He commented, “This project has been an exciting challenge allowing us to incorporate the very best equipment currently available. It is a great affirmation of what these brilliant technologies provide, showing that with the right support solar plus storage will continue to grow into a vital part of the UK energy mix. The system is a microcosm of the most scalable energy technology available. Nothing else is as accessible or provides this level of energy independence.”

He continued, “Anyone passing would have to look hard to even see this house has solar panels fitted, and would never know that it probably has the smallest electricity bill in the street. This is truly a solar home”.