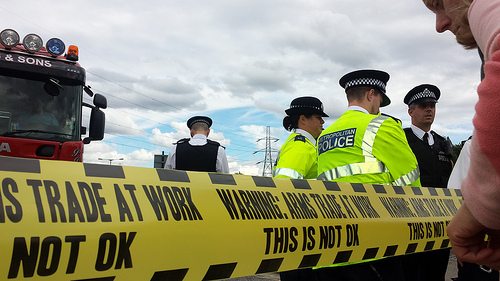 Green party MP Caroline Lucas has accused the government of “startling complacency” after two companies were ejected from an arms fair in London for promoting illegal weapons.

The incident happened at a Defence Security and Equipment International (DESI) event last Wednesday.  DSEI released a statement saying, “We can confirm that Tianjin Myway International Trading Co and Magforce International have been ejected from DSEI having been found with literature suspected of breaching UK law.”

She said, “It’s frankly disgusting that items like this are being promoted at a supposedly legitimate trade event in Britain.

“It’s incredibly worrying that it takes a question in parliament for action to be taken when there was clear evidence of items being promoted illegally.Time and again the organisers of DSEI have shown that they cannot guarantee that exhibitors will remain in the law. The government is supposed to regulate this event and has shown starling complacency.”

DSEI is held every two years in London and has regularly attracted attention from activist groups. The 2001, 2003 and 2005 fairs were all targeted by protests and police have previously criticised the cost of policing the event.