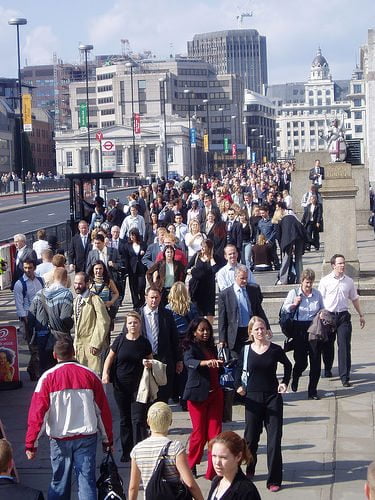 The Office for National Statistics (ONS) has released figures that suggest the UK population grew by 420,000 between 2011 and 2012.

Released in a bulletin on Thursday, the stats say the growth is a result of a baby boom and migration. The ONS adds that the number of births from mid-2011 to mid-2012 was the highest since 1972, with 813,200 babies born in that period.

The figures suggest that the number of migrants coming to the UK were more than half a million, with a net migration of 165,600, and are likely to spark debate amongst politicians as to controlling immigration.

The UK Independence Party (UKIP) is one of the most vocal critics of immigration, saying in its policy documents that the UK “simply cannot sustain the level of immigration that adds another one million people to the population every four to five years. This puts an intolerable burden on our infrastructure and public services.”

The Migration Matters Trust, a group of MPs and businesses executives that campaigns for an open debate on migration, claims that it can bring great benefits to the UK economy.

Director Atul Hatwal said, “The pace of change needs to be managed but migrants bring major benefits to the country.”

He outlined the consequences of drastically reducing immigration numbers, which would see the pensioner to worker ratio decrease from three to one as it currently stands, to one to one in the coming decade.

“The crippling impact of debt for Britain would be similar to that faced by Greeks today”, Hatwal said.

“Britons would have to endure significantly higher taxes, much deeper cuts to services such as the NHS and a shrinking economy.”

Seb Beloe of WHEB Asset Management recently stressed the importance to “invest in companies providing solutions to sustainability challenges”, including those that look to benefit from or tackle an ageing population.

The global population is expected to rise to 10 billion by the end of the century.