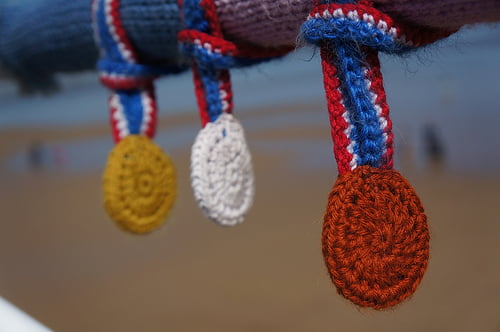 What happens when gold, silver and bronze reserves run out?

The gold medal is arguably the most distinguished symbol in sport. But, with reserves depleting at a rate of knots, it’s estimated that Olympic Games organisers will have to look for a back-up compound sooner than we think.

Picture the scene. It’s the year 2032 and after 40 years of hurt, a British sprinter has just fought off fierce competition to claim first place in the men’s 100m final.

Upon winning, he steps up to the podium alongside his fellow competitors from China and the USA to receive his prize: the coveted platinum medal.

The third-placed American gets the aluminium, whilst the runner-up from China is awarded tantalum, and God Save the King rings out throughout the stadium.

It’s an historic day, and not just because Britain has won the event for the first time since Linford Christie, by now Sir Linford, won gold at Barcelona in the 1992 Games.

Ah, gold. The sought-after symbol of all that was good about sport, had finally met its maker shortly after the 2020 Games. The decorated trio of gold, silver and bronze are etched into Olympic history, but that’s where they remain, after the resources used to manufacture each ran out.

Athletes now line up on the podium to receive a less-catchy medal trinity; platinum, tantalum and aluminium.

Rewinding to the present day, where we’re currently in the midst of the London 2012 Games, it might seem like that short look ahead to the future is stuff of science fiction. I wish it was.

No. Statistics gathered by data visualisation extraordinaire, David McCandless, for his 2009 book, Information is Beautiful, shows some worrying trends in some of the Earth’s most valuable natural resources. And sooner than we think, the Olympic medals will be severely hit by this.

According to McCandless’ dataset, which is visualised by Blue & Green Tomorrow below, best estimates predict that only another 11 years’ worth of silver is available. And if extraction and production continue to grow at their current rates, this lifespan decreases to just seven years.

So we might even struggle to make medals for the 2020 Games in Istanbul, Madrid or Tokyo.

The question is; what are we doing about it and what are the solutions? The platinum, tantalum and aluminium scenario is fine for the short-term, but even that will run out eventually.

So is it time to go back to the Olympics’ roots and readopt the Ancient Greeks’ PanHellenic Games’ principles of simply awarding athletes an olive wreath when they won? Or perhaps we should go for the less durable option displayed in the image at the top of this article?

One thing is for sure; resources are depleting rapidly and we’ll soon be forced to rethink the production of the everyday items that we take for granted.

But rather than being forced to do this when it might actually be too late, why not use initiative and attempt to find alternative, clean, renewable resources to use? To us, it’s the logical and most sustainable option.

Enjoy this year’s Olympic Games – we sure are – and savour each and every gold, silver and bronze medal that Team GB wins. Because they might be the last in a very, very long time.