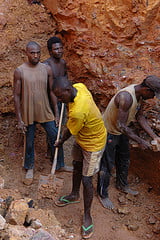 A report led by the Gaia Foundation claims that the world is edging towards destruction because of a current trend in land grabbing for mining.

Land grabbing is a practice common in the mining, coal and oil industries that involves private investors buying out huge plots of land for the extraction of resources, usually in developing countries, and usually with devastating impact of local communities.

A report led by the Gaia Foundation claims that the world is edging towards destruction because of a current trend in land grabbing for mining.

Land grabbing is a practice common in the mining, coal and oil industries that involves private investors buying out huge plots of land for the extraction of resources, usually in developing countries, and usually with devastating impact of local communities.

According to non-profit organisation, GRAIN, since 2006, 35 million hectares of land across 66 countries have fallen prey to land grabbing, with 416 ‘deals’ taking place.

“This latest trend in global  land grabbing – that for outsourced food production – is only one part of a larger attack on land, territories and resources”, explains Henk Hobbelink of GRAIN, in the report, called Opening Pandora’s Box: The New Wave of Land Grabbing by the Extractive Industries and The Devastating Impact on Earth.

“Land grabs for mining, tourism, biofuels, dam construction, infrastructure projects, timber and now carbon trading is all part of the same process, turning communities into refugees on their own land.

“Living from the land is becoming more difficult and, in many parts of the world, more dangerous by the day.”

The report has been written in conjunction with environmental groups from Europe, Africa and Asia.

It’s easy to feel helpless in such large scale problems, but at Blue & Green Tomorrow, we firmly believe that there is a way that individuals can contribute, and Liz Hosken, director at Gaia, explained what people can do to help.

“As people become more conscious, they start saying, “No, we want organic, we don’t want genetically-modified food””, she explained.

“We start using our consumer power to say “No”, and to start to resist what’s been pushed upon us.

“What is actually critical is that people are aware of all their little bits of equipment, and what it actually takes to make an iPhone or an iPad, so that we don’t go through every single model and have different versions of the same thing.

“We need consumers to only take what [they] really need, and to insist that [they] don’t go after the latest models … and that if there is a new model, companies have to recycle.”

Acclaimed anthropologist Margaret Mead once said, “Never doubt that a small group of thoughtful, committed citizens can change the world. Indeed, it’s the only thing that ever has.”

And Hosken entirely echoes this viewpoint.

“Everything we take, we’re stealing from our children’s future”, she said.

“We just have to demand cooperation and use our consumer power to hold these industries to account and say “No”.

“I think there is hope, I think we have to move fast, I think momentum is building, and it just feels that there is a readiness and all that you’re doing is supporting that.”

Supporting those companies that work against the harm being done to communities is as easy as buying Fairtrade produce, or voting with your feet (and saving money in the process) by not following extravagant consumer trends. To go one step further, ensure that your financial assets are tied up in ethical, responsible and sustainable practices.

Such simple changes go a long way to helping banish future unsustainable practices in the developing world. Get in touch with your IFA, or fill in our online form and we’ll connect you with a specialist ethical adviser.