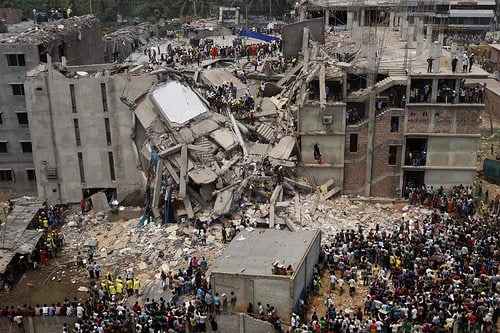 One year ago today, the fashion industry was exposed after one of the worst tragedies in the sector occurred, when 1,138 garment workers died following a factory collapse in Dhaka, Bangladesh.

The factory supplied many goods to high-profile brands, such as Gap, Benetton and Primark, which were accused of ignoring the health and safety of workers in developing countries. The tragedy also shed light on the holes in the industry’s supply chain, which shareholders and the public often ignore.

Despite global outrage, which caused demonstrations and calls for action to address working conditions and fair wages, the issue of transparency in the supply chain has not been completely solved.

Around 60% of Bangladesh’s garment industry exports towards Europe. Workers have been reported to work up to 19 hours a day, while producing goods for western firms, such as Gap, Lidl and H&M and earning  as little as £38 per month.

The UK announced its support to improve garment workers’ conditions, while pressure groups call on retail giants to give proper compensation to survivors, many of which are permanently injured and are unable to work again. Other initiatives, such as the Fashion Revolution Day, try to raise awareness among consumers, the ones who have the power to make the difference by choosing ethical clothes.

Bangladeshi workers have seen little, if any, improvements when they were given a 77% wage increase – to £43 a month. However, most of the victims involved in the accident have not received adequate compensation, as the Rana Plaza Donors Trust Fund raised only $15 million (£8.9m) of the $40 million (£23.8m) expected.

This means that survivors have received a smaller compensation than what was initially agreed and are struggling to cope with basic needs and high medical bills related to the incident’s injuries.

Soon after the disaster, non-governmental organisations, firms and suppliers signed the Bangladesh Safety Accord, with some notable exceptions, such as Asda and Gap.

Today, one year later, campaigners have planned to form a giant human chain in London’s Oxford Street to commemorate the tragedy and demand a more transparent supply chain.

The hope is that the outrage and compassion showed by many people and institutions across the world will eventually result in an historical change in the fashion industry, which will not fade away like the lives of those who suffered the most terrible loss in the Rana Plaza disaster.