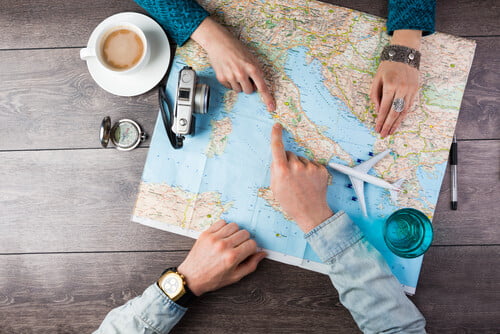 Can Commercial Air Travel Ever Be Truly Sustainable?

I see lots of people argue in favor of changing the world to make it more sustainable. However, some of the arguments people are making are easier said than done. One of them is the importance of making air travel more sustainable.

Tatiana Schlossberg penned an article in The New York Times talking about the need for making air travel more sustainable. She pointed out that a single flight from California to New York produces 20% of the carbon emissions as the average person’s car will over the course of an entire year. She astutely pointed out that there is no way around the fact that flying is harmful to the environment. However, there are also some important ways to reduce your carbon footprint while flying.

We interviewed some environmental experts to get more information.  They shared some good views on the issue.

How Can Air Travel be More Sustainable?

It’s easy to feel good about yourself for ditching your car and taking your bicycle to work every day. After all, the amount of gasoline you’re now not burning is pretty significant, even if it’s only being generated from one person. In fact, you feel so good about yourself that you decide you’re earned a holiday. Except that packing your bags, grabbing your reusable steel straw, and taking off from your nearest airport is actually doing the air a whole of hurt. In fact, just two round-trips between the two coasts produces around half of the total emissions that your car would create over an entire year. But that does mean we should stop flying altogether?

Not exactly. But the one thing that every passenger can do right now to make a difference would be to fly less. This is tricky, especially considering that budget airlines such as Ryanair and EasyJet have made it so easily to simply pack and travel to a variety of destinations for such a minuscule price tag. But traveling less would mean less fuel burned per passenger, obviously resulting in less damage to the environment.

Depending on the length of your destination, it might even make more sense to drive, ecologically speaking, if you’re traveling in a full car and the destination isn’t too far away. However, not everyone has this luxury. If you do have to fly, try and ensure that the flight is direct. Although connecting flights tend to be cheaper, by virtue of the fact that you’re using more than one aircraft to get to your destination, the chances are that you’re burning up a lot more fossil fuels. Check out some other ways to travel sustainably here.

But the above methods aside, cutting down on flights is the only no-frills method of guaranteeing results.

The problem is that many of us don’t want to stop travelling, and this sentiment is reflected in the prediction that by 2040, more than 50,000 planes will be in service daily, serving even more routes than are currently available. Since our demand for travel is increasing drastically, it makes sense that the onus for sustainability should fall to the airlines and aviation industry, who are the direct cause of pollution and the chief emitters of greenhouse gases. These companies should be held accountable for their actions based on how much they contribute to the problem of climate change.

El Nomad wrote about the importance of sustainability in air travel. They pointed out that you should tell the airlines how you feel about sustainability.

While it’s true that aviation in its current state still has a long way to go with regards to reducing its global carbon footprint, there’s still hope. Airlines in general tend to be some of the most accountable organizations in the world. They’re often held in check by legislature and strict policy to ensure that passengers and travelers are never conned out of money (often due to the egregious price of airline tickets).

A good example of this is Flight Compensation Regulation 261 which ensures that passengers receive compensation and help for delayed flights and cancelled departures. Based on this legislation, it’s not unreasonable to assume that airlines will be held accountable for their greenhouse emissions and how these are affecting the environment. Should this happen, cleaner, more efficient technologies would no doubt be developed or airlines would be paying huge subsidies and fines which could then be redirected to help fight climate change.

Sustainability Should Be Your Focus with Air Travel

Air travel needs to be more sustainable. There is no getting around it. But the good news is that there things that you can do to hold the airlines accountable. Are you up for that?