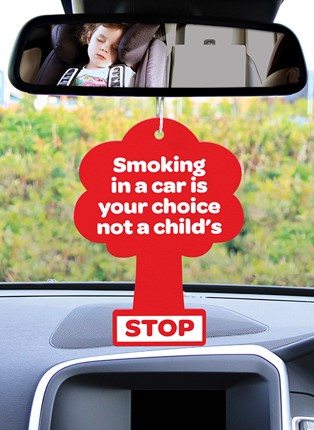 As the Government implements new rules designed to stamp out smoking in vehicles with under 18s on board from the 1 October 2015, new research from financial comparison website money.co.uk, which was carried out amongst 1,000 drivers that smoke in their vehicles, reveals the proposed penalty may not be severe enough. In fact, 21% of those surveyed claim a £50 fine would not stop them doing it.

For those unfamiliar with the change in the law, the British Lung Foundation has some excellent information here. From 1 October 2015 it will be illegal to smoke in a vehicle with anyone under the age of 18 present.

Despite the Department of Health’s best efforts to publicise the change in law, 29% of drivers that smoke in their vehicles are completely unaware of it; a figure which hits nearly four in ten London drivers. With drivers at risk of being fined twice if they don’t stop passengers smoking this could be an expensive oversight.

Moneyfacts’ research also reveals that the extent of this widespread problem could be difficult to police as almost two out of three (61%) drivers that smoke admit they do so when they have passengers in their vehicles; 31% of these do it with under 18s on board. More shockingly, one in ten drivers admit they smoke with children aged 11 or younger in the vehicle. A further 6% think this it is okay to smoke with passengers aged four or younger.

Smokers seem to have some interesting views on why it’s ok to ‘light up’ with children on board. More than one in ten (11%) think it’s ok ‘as long as the windows are open’. One in ten reassure themselves with the belief that children are not at risk if you smoke in the vehicle they are travelling in. Interestingly, 13% admit they smoke in their home around under 18s and question why they shouldn’t smoke in their vehicle. Over one in five (22%) drivers that smoke think they should be able to do so in a private vehicle without incurring a fine – regardless of the passengers’ age.

When it comes to the Government’s decision to apply this law to passengers under 18, many drivers feel the age should be lowered. 12% think the ruling should be for passengers under 16 years old, not under 18s. 5% think it should be just for under 12 year old passengers and 4% think just applying the law to the under 5s is sufficient.

Hannah Maundrell, Editor in Chief of money.co.uk comments: “Smoking with passengers in a vehicle is not ideal, regardless of their age. However given this impacts over four million children, the fact that the Government has finally acknowledged this and are attempting to protect them from the dangers of passive smoking in such a confined space is certainly a step in the right direction. There is also a road safety issue to consider here as smoking can be a distraction which could make drivers a higher risk for accidents, maybe something insurance underwriters end up taking into consideration.

“As almost a third of drivers smoke in their vehicles with under 18s on board this is going to a difficult and time consuming law to enforce – maybe completely outlawing smoking when passengers are in the vehicle would be a better way to do this. There are also several nuances in the law that impact 17 year olds specifically as they could be fined twice if they’re travelling with friends of the same age who are smoking. To avoid the £50 fine, all drivers really need to read up on the rules on smoking in vehicles post 1st October; but this is especially true for new drivers who will already be struggling to cover the cost of driving and certainly can’t afford to risk an additional fine.”

Laws banning smoking in cars carrying children have been introduced in a number of jurisdictions in Canada, the United States, Australia, South Africa, Bahrain and Mauritius.

61% of drivers admit they smoke with passengers on board, this affects over 300,000 children under four

– 31% of ‘smoking drivers’ admit they smoke with under 18s in their vehicle; this impacts over four million[2] children. One in ten smoke with under 11s on board and 6% admit they think it’s ok to ‘light up’ with children aged four and under as passengers
– 11% of drivers think it’s okay to smoke in a vehicle with children on board as long as the windows are open, a further one in ten do not think children are at risk if you smoke in the vehicle they are travelling in
– 21% of drivers that smoke say a £50 fine would not stop them doing so in their vehicle with under 18s on board. 13% claim they smoke in their home with under 18s around so why not in their car?
– Nearly a third (29%) of drivers that smoke in their vehicle are not aware of the forthcoming change in law that bans smoking with under 18s on board; this lack of awareness is highest in London (39%)
– 12% think the ruling should only be applied for passengers under 16 years old, not under 18s. 5% think it should be just for children under 12 years old and 4% think the rule should only be applied for the under 5s