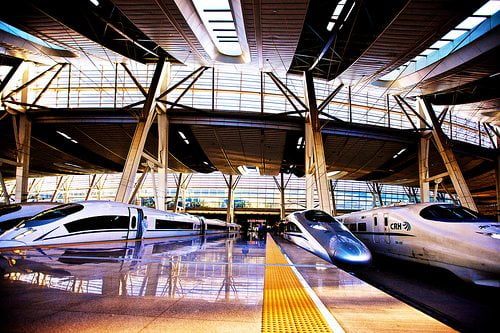 China ‘in discussions’ over 125-mile underwater rail link to US

Chinese engineers are considering plans to build an undersea trainline connecting Beijing to the US, according to reports from official state media.

Officials are said to be considering a high-speed route that runs through eastern Siberia and across the Bering Strait, via a 125-mile long underwater tunnel, reaching the US by cutting through Alaska and Canada. For comparison, the Channel Tunnel is 31.4 miles long.

The whole line would run for 13,000km and would require a two-day trip.

“Right now we’re already in discussions. Russia has already been thinking about this for many years,” said Wang Mengshu, the engineer quoted by the Beijing Times.

The article also describes plans for other high-speed rail projects, including one that would connect London to Moscow, via Paris, then to Berlin, Warsaw, Kiev.

However, few other details are readily available and no other experts have spoken to confirm the plans, leaving some doubt over the likelihood of such a project becoming reality.

Many environmentalists advocate the use of rail travel as a less polluting alternative to air travel.

According to the Environmental Transport Association, a short-haul flight from London to Manchester, for example, would emit 63.9kg of carbon per passenger if the plane were 70% full. A train making the same journey would emit only 5.2kg per passenger, if the train were also 70% full.

With air traffic forecast to rise rapidly this century, significant investment in high-speed rail infrastructure is seemingly required. However, the very construction of such a large project would also prove environmentally damaging.

For example, carbon emissions caused by the construction of the far smaller HS2 line are expected to outweigh carbon savings over the first 60 years of the line’s operation.