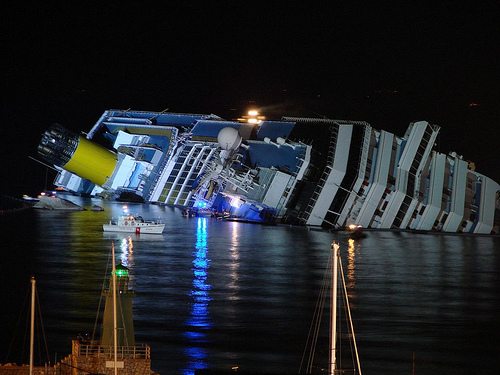 The luxury ship that sank off the island of Giglio in Italy more than two years ago has been moved away after a small amount of oil leaked during the operations. An emergency team has ensured that the spill has been immediately dealt with and will have no consequences on the environment.

The oil leak occurred as experts managed to lift the 115,000 tonne cruise ship, in order to tow it away from the fragile location in the island of Giglio, where it has been stood over the past two and a half years after it sank.

Authorities and the company owning the ship have said that the oil spill has been immediately contained and will have no consequences. As the leak was noted, an oil spill response team was alerted and the emergency solved, with water analysis showing no contamination.

Company Costa Cruises said in a statement, “A small amount of hydrocarbons was spotted in the mid ship/aft of the wreck. The oil spill response team was immediately activated and the area was cleaned through the use of absorbent booms. The team is replacing the absorbing booms in the area.”

The ship’s wreck has now emerged by 6.5 metres and will be towed towards Genoa.

On 13 January 2012, the Costa Concordia ship crashed on the island after hitting an underwater object on the seafloor. Thirty-two people died in the accident, for which captain Francesco Schettino was blamed.

It was first feared that an oil spill could occur and cause enormous damage to the island, which is a much-beloved tourist spot and part of a marine protected area, but eventually, the ecological disaster was avoided.

Stranded Galapagos oil tanker ‘does not represent an environmental risk’