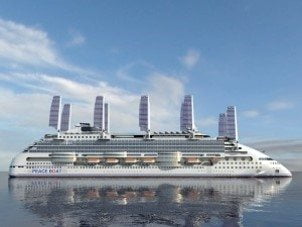 Cruise Companies Lead The Charge Against Climate Change, But Will Ships Really Be Emission-Free In 5 Years’ Time?

Designs for the world’s “greenest” cruise ship were unveiled at the United Nations Conference on Climate Change (COP21) in Paris this week. The cruise industry will continue to play a leading role in the fight against climate change, but talk of fully eco-friendly ships being in operation within the next five years could be premature.

That’s the view of James Cole, Managing Director at cruise retailer Cruise118.com, who insists that cruise lines are setting a strong example by investing in eco-friendly measures. However, it’ll take time before completely emission-free ships are the norm.

His comments came shortly after designs for the world’s “greenest” cruise ship were unveiled at the United Nations Conference on Climate Change (COP21) in Paris, which draws to a close this week (December 11th).

Created by Peace Boat, the ‘Ecoship Project’ will be a 55,000-ton cruise ship that is packed full of impressive eco-friendly technology and features. Aside from the hybrid engine, the vessel will also boast ten retractable solar-panelled sails and retractable wind generators.

The announcement has understandably created plenty of excitement, but while it’s encouraging to see the cruise industry flying the flag for energy-efficiency, James has warned that we shouldn’t get too carried away.

“By 2020 there will undoubtedly be more eco technology and focus within cruising but a fully eco ship is unrealistic,” he commented.

“Climate change is one of the most important issues facing the planet right now, and like other industries across the globe, cruise lines are doing their bit by investing in new technologies to make their ships as eco-friendly as possible.”

James also noted that while the number of travellers looking for “green cruises” is steadily increasing in the UK, international markets appear to be the driving force behind this trend at the moment.

“The ships aren’t just becoming more innovative for passengers but for the environment as well, from new fuel technologies to solar panelling and increased efforts with recycling. The demand for eco-friendly cruises seems to be more international than in the UK market at present but it’s something that seems to be growing and ships are taking it more seriously, so I expect to see more efforts to make ships more eco-friendly in future,” he added.