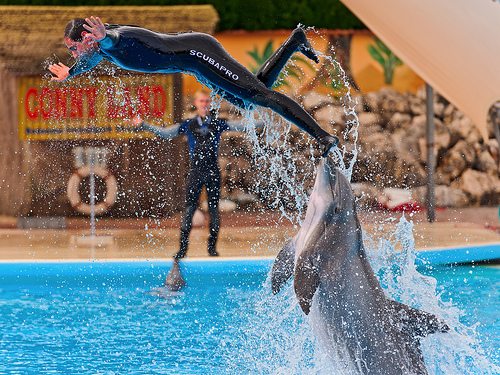 Eighty-six per cent of British tourists have no interest in visiting marine circuses while on holiday, according to a survey by the Born Free Foundation and ResponsibleTravel.com.

The poll asked 2,050 people whether they were interested in visiting a marine park where orcas and dolphins were kept in captivity and made to perform. Initially, 61% of respondents said no, but after being told facts about animals being drugged or kept in small tanks, this figure rose to 86%.

Will Travers, president of the Born Free Foundation, said, “Are the days of the dolphinarium over? It seems clear that when presented with the information on which to make an informed decision, British travellers have had enough.

“It is time to bring the curtain down on the exploitation of whales and dolphins in captivity – just like the exploitation of wild animals in travelling circuses. There are no longer any captive dolphins in the UK and I hope that the result of this survey will hasten the day when there are no captive dolphins kept for public entertainment anywhere in the world. We have a responsibility to make that dream a reality.”

Justin Francis, managing director at ResponsibleTravel.com, added, “For too long the travel industry has buried its collective head in the sand on this issue. Just as there was a point when circuses’ time was up, the same is happening with orca circuses. It’s clear that the majority of holidaymakers are not interested in these shows for ethical reasons.

“The time has come for travel companies, and the representative body ABTA [Association of British Travel Agents], to face the facts and stop supporting this irresponsible form of tourism.”

ResponsibleTravel.com recently launched a petition against the practice of keeping wild animals in captivity, branding it “ethically wrong”. This came following controversy at US marine park SeaWorld, where it emerged orcas had been sedated to make them less aggressive. This led to attendance figures at the park falling by 13%.