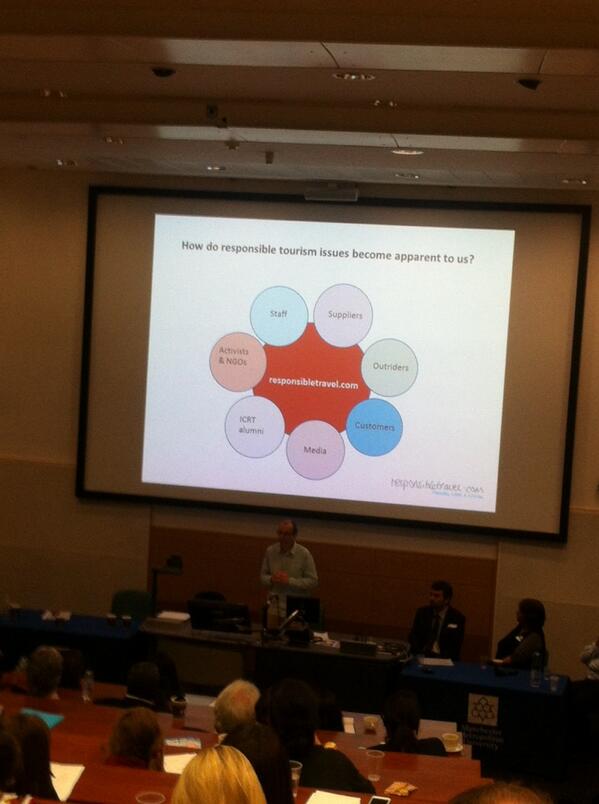 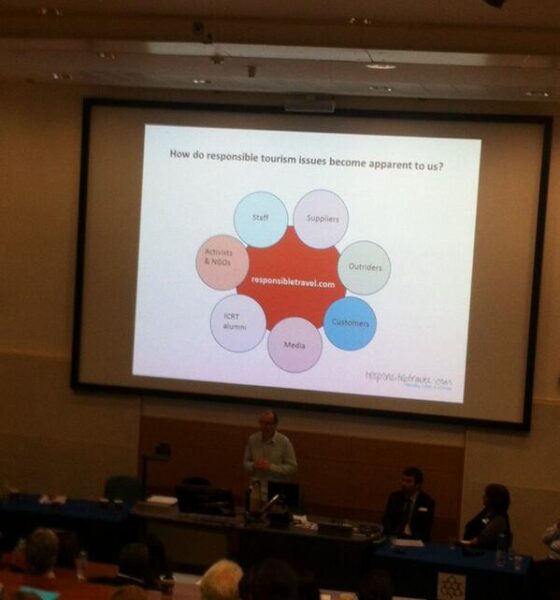 Leading figures from the travel and tourism industry gathered in Manchester on Friday for the eighth international Responsible Tourism in Destinations (RTD8) conference. Here’s what was said on day two.

After a thought-provoking first day in Manchester looking at the challenges of tourism development and management, the second day saw the event move from Gorton Monastery to the city’s Metropolitan University (MMU).

Delivering the first keynote speech was Kevin Anderson from the Tyndall Centre for Climate Change Research at neighbouring Manchester University. Anderson outlined the grim reality facing us all in the form of climate change.

One of the world’s leading climate scientists, he covered carbon budgets, aviation and the startling trend of increasing emissions. He noted how in the 20 years since the original Rio Earth Summit in 1992, the follow-up event Rio+20 could have got its name because of the vast increase in carbon emissions in that two-decade period.

At one point, the projector he was using for his presentation cut out, with Goodwin jokingly suggesting the blackout may be a premonition of the future.

Anderson claimed the biggest obstacle in tackling these major problems was that we lack the clarity and imagination to picture a different world. But the people who are the ones tasked with leading the transition are the ones we each see in the mirror every morning – in other words, us.

Following Anderson’s keynote was another by Simon Robinson from Leeds Metropolitan University. He explored what the notion of responsibility means – and admitted that its definition was not widely agreed.

The first panel discussion of the second day looked at how to get agreement on the issue and its cause. Andy Cooper, director of government and external affairs at Thomas Cook, explained about the organisation’s community engagement programme. He said its approach not only benefitted communities, but also employees and customers.

Then came Paul Britton from Thomson Cruises, the third largest cruise line in the UK, with 250,000 annual passengers.

He said many businesses in the tourism industry would “like” to be sustainable but they think it’s expensive, has no tangible benefits or reduces customer experience. But he added that making sustainability easy for the industry to understand and displaying the business case were two effective ways of communicating it.

Sallie Grayson from People & Places spoke next about the tourism industry’s responsibility for child protection. In an impassioned presentation, she said tourism needed to change in its response to the issue, but first, it needed to learn why. She added that “good intentions are not enough“.

Justin Francis of responsibletravel.com then spoke about tourism and activism, before Andreas Walmsley from Plymouth University closed the session by addressing the issues of poor working conditions in tourism. Investment in education for “tomorrow’s leaders” is crucial, he said, and tourism needs to continue to engage with industry and consumers.

Following the panel discussion was a keynote by Elise Allart from TUI Nederland – a tour operator that has won awards for its work against the sexual exploitation of children in Brazil.

Tourism is not the cause of his problem, she said, but it has a vitally important role in its prevention. Businesses in the industry can sign the Child Protection Code in an effort to drive out the practice for good.

RTD8 then welcomed another international presenter, in the form of Adama Bah from the West African branch of the International Centre for Responsible Tourism (ICRT). He detailed how tourism can benefit the poor – providing examples of how it has worked in his native Gambia.

Much of the conference so far had focused on what the industry itself can do to be more sustainable and responsible, but the first two speakers after the lunch break sought to bring another group to the table – the consumers.

Michael Ball, a freelance tourism consultant, spoke of how and where people travel in different stages of their lives. He said intergenerational travel relies on two key experiential constituents: meaningfulness and togetherness.

Taking to the stage for the second time, Justin Francis from responsibletravel.com talked about tourists wanting more real and authentic travel experiences. He said the industry’s messaging needed to be more about experience and local communities – rather than a certain trip’s sustainability credentials.

Following them was Nikki White, head of sustainability and destinations at ABTA. Her presentation was about social inclusion, and how the industry can cater to elderly, disabled and LGBT travellers. Not all destinations are welcoming and suitable. We need to accept that there are people with different holiday needs, she said, but it’s important we treat them as individuals and not group them together.

The next panel discussion was about processes – and what we can use to effectively respond to the issues of destination management and responsible tourism.

Stephen Farrant, director of Business in the Community’s International Tourism Partnership, spoke about the organisation’s leadership on initiatives like the Hotel Carbon Measurement Initiative – a project that aims to standardise how hotels measure corporate customers’ carbon impact.

He was followed by Salli Felton, acting chief executive of the Travel Foundation, who detailed some of the problems related to social inclusion. She said “hassle” was created when local people felt disconnected from tourism.

Earlier in the day, the climate scientist Kevin Anderson had spoken about his decision to give up flying a decade ago because of its environmental impact. And the next presentation – by Paul Hooper from the Centre of Aviation Transport and the Environment at MMU – looked at whether aviation can ever become sustainable.

He said tourism – like aviation – was a “victim of its own success”. He urged the industry, such as hotels and airports, to start accounting for scope 3 emissions. These are emissions not produced directly (scope 1) or indirectly through the consumption of electricity, heat or steam (scope 2) but instead from the supply chain, the materials and fuels used and any other indirect sources.

He added that airports must take responsibility for airline emissions or else risk losing credibility in their reporting activities.

Closing the panel on processes, Cathy Parker, professor of marketing and retail enterprise at MMU, spoke about designing – and marketing – sustainable destinations. “Sustainability means everyone has got to win”, she said.

The next session saw delegates break up into smaller groups to discuss more specific issues. In one, about carbon and climate change, attendees discussed how to engage people in different, more low-carbon ways of travelling – for example, going on holiday at unusual times of year and for different purposes.

Negative marketing – where consumers are perhaps told that going to a certain place is bad for the local community, for example – works where appropriate. So too does “selling the sizzle” – playing up the great places that might not be on a consumer’s radar.

Another breakout session looked at responsible consumers and the consumer experience. Xavier Font from Leeds Metropolitan University said the tourism industry was talking to consumers in the wrong language. Environmental audits only appeal to the committed environmentalist niche and the wider audience simply wants fun.

Tourist guide Jean Bailo talked about using registered local guides who have insurance and a code of conduct, adding that we need to make sustainability enjoyable.

Vicky Smith, consultant at the ICRT consultant and online specialist, explained about how consumers can tell the difference between different types of responsible tourism and how organisations differentiate themselves. She pointed towards Google’s work on the five stages of travel – dreaming, planning, booking, experiencing, sharing – which therefore suggested most people for most of the year are thinking about their holidays.

Davina Stanford from Leeds Met spoke about her ‘wise growth’ research and how to keep it real for residents and visitors in destinations. We really do need persuasive communication, she said, because nudging people will only take us so far.

Into the penultimate session of day two and panellists sought to find out how we can ensure and report progress.

Rachel Dunk from MMU’s Centre of Aviation Transport and the Environment noted Apple chief executive Tim Cook’s comments on profit-motivated investors not being welcome at the tech giant. She said this was proof that sustainability was becoming an increasingly mainstream consideration.

Ruth Holroyd of Oakleaf Business Solutions rounded off the panel with a presentation on sustainability reporting, saying it was one of the most effective ways to get sustainability onto the board agenda.

In the final session of the day two at RTD8, Martin Brackenbury and Jason Freezer reflected on what we had learnt from day one.

Brackenbury, president of the International Federation of Tour Operators for two decades until 2010, described the first day as “extraordinarily stimulating”. He described tourist destinations as “living, changing entities” and said how they needed to be “nurtured like gardens“.

Meanwhile Freezer, head of destination management at VisitEngland, called for the private sector to become more engaged with responsible tourism and to join the conversation at the next RTD conference. He concluded that the “silo mentality” that exists – the thinking that one industry alone can change the world – needed to be broken.